Disney Wiki
Register
Don't have an account?
Sign In
Advertisement
in: Sister Act, Cities, The Princess Diaries,
and 26 more

The only consolidated city-county in California, it encompasses a land area of about 46.9 square miles (121 square kilometers) on the northern end of the San Francisco Peninsula, giving it a density of about 17,179 people per square mile (6632 people per kilometers). It is the most densely settled large city (population greater than 200,000) in the state of California and the second-most densely populated major city in the United States after New York City.

San Francisco as seen in The Princess Diaries

Pin of Stitch in San Francisco 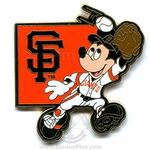 The Walt Disney Family Museum at the Presidio

The Letterman Digital Arts Center at the Presidio

San Francisco in Inside Out

The Golden Gate bridge in Inside Out

The Golden Gate Bridge in Cars 2