Disney Wiki
Register
Don't have an account?
Sign In
Advertisement
in: Article of the week, Locations, Schools,
and 3 more
English

“We push the boundaries of robotics, here.”
―Robert Callaghan

San Fransokyo Institute of Technology (otherwise known as San Fransokyo Tech or SFIT) is a prestigious university located in the city of San Fransokyo. It is also the school where Hiro and his friends attend.

The school was built over 100 years before the events of Big Hero 6. It is attended by various students who study in the fields of science and technology. Every year, the school holds a convention at its Exposition Hall, where up-and-coming geniuses are meant to showcase new creations to receive acceptance into the university.

Tadashi Hamada, Go Go Tomago, Wasabi, and Honey Lemon were in its robotics program headed by Professor Robert Callaghan, who was also a mentor to Tadashi. The position of its school mascot was filled by Fred. During the time that the film takes place, Tadashi's brother Hiro presents his invention, Microbots, at the showcase. An impressed Callaghan grants Hiro acceptance into the school. However, following the end of the showcase, Callaghan steals Hiro's Microbots for his own nefarious purposes, and to cover his tracks, sets fire to the Exhibition Hall, forcing everyone in the campus' vicinity to evacuate. The building explodes just as Tadashi rushes in to save Callaghan, unaware that the latter used the Microbots to save himself.

After the defeat and capture of Callaghan, Hiro begins to attend the school with Go Go, Honey, Wasabi and Fred. A building dedicated to Tadashi is erected at the campus, in which Hiro accepts the honor for his late brother. 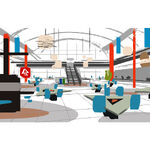 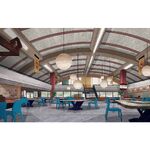 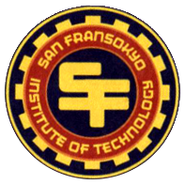 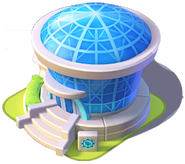