Sandra Miju Oh, OC is a Canadian-American actress and voice actress who is best known for her role as Dr. Cristina Yang on the ABC medical drama series Grey's Anatomy from 2005 to 2014, for which she received five Emmy nominations. She starred as Eve Polastri in BBC America series Killing Eve from 2018 to 2022, for which she has already received two Emmy nominations. She also voiced Castaspella in Dreamworks’ She-Ra And The Princesses of Power.

For Disney, Oh voiced Ting-Ting in the 2005 Disney direct-to-DVD film, Mulan II, played Vice Principal Gupta in the 2001 Disney comedy film, The Princess Diaries, and voiced Virana in the 2021 Disney animated feature film, Raya and the Last Dragon. She also voiced Sun Park in the Disney Channel animated series American Dragon: Jake Long and one of Dr. Doofenshmirtz's ex-girlfriends (in the Phineas and Ferb episode "Get That Bigfoot Outta My Face!"). In addition, she played Patti in Under the Tuscan Sun. She voiced Ming Lee in the 2022 Disney/Pixar film, Turning Red. 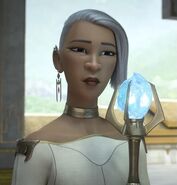 Virana
(Raya and the Last Dragon) 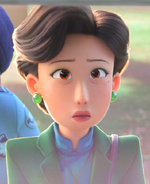 Sandra Oh speaks at the Killing Eve panel during the 2019 Winter TCA Tour.