She began her professional career working in the entertainment department of the Walt Disney World Resort. She performed in live shows and events including a duet with Tommy Tune in Disney's July 4th Spectacular television special.

She was a guest star on Muppets Tonight episode 205 as the spokeswoman for Ernst Stavros Grouper's corporate raiderettes. She also played the role of Clover in an episode of Lizzie McGuire and supplied additional voices for Muppet Treasure Island and Wreck-It Ralph. 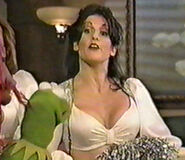 Sandy Fox with Kermit the Frog.
Add a photo to this gallery
Retrieved from "https://disney.fandom.com/wiki/Sandy_Fox?oldid=3933447"
Community content is available under CC-BY-SA unless otherwise noted.