Sandra "Sandy" Martin (born January 9, 1950) is an American actress who has over 60 film credits and has been an actress, producer, director, and writer in professional theater productions. Her only Disney role so far is Dorothy in Wander Over Yonder. 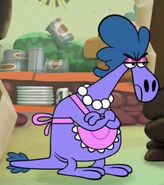 Dorothy
(Wander Over Yonder)
Add a photo to this gallery
Retrieved from "https://disney.fandom.com/wiki/Sandy_Martin?oldid=3701035"
Community content is available under CC-BY-SA unless otherwise noted.