Piper
Sanjay's Super Team is a Disney/Pixar short released alongside Pixar's The Good Dinosaur.[1] It was pitched and created by Pixar animator Sanjay Patel. It is the first Pixar film to have an Indian protagonist and feature religion as a major plot point.[1] It is also the second Pixar short film to be rated PG by the MPAA[2] for some scary images; the first was the Monsters University short Party Central.

"In “Sanjay's Super Team,” the new short film from Pixar Animation Studios, accomplished artist Sanjay Patel uses his own experience to tell the story of a young, first-generation Indian-American boy whose love for western pop culture comes into conflict with his father’s traditions. Sanjay is absorbed in the world of cartoons and comics, while his father tries to draw him into the traditions of his Hindu practice. Tedium and reluctance quickly turn into an awe-inspiring adventure as the boy embarks on a journey he never imagined, returning with a new perspective that they can both embrace."[3]

The short is about Sanjay, a young boy who prefers watching his favorite cartoon "Super Team" rather than in accompanying his father in a daily Hindu ritual. Sanjay is annoyed by the bell his father rings, while his father is bothered by the sound of the television. As a result of a confrontation, his father turns off the TV, and asks Sanjay to take part in the prayer.

His father is standing in front of a box, in which he lights up a lamp in front of the representation of three deities (Hanuman, Durga and Vishnu). Bored to death, Sanjay tries to reach to a superhero action figure his father confiscated. In doing so, he accidentally puts out the lamp. As this happens, the setting is suddenly transfigured into a temple room adorned with three statues. The smoke from the dying candle—now a large fireplace—aggregates to form an angry creature, which takes for himself the attributes of the three statues, destroying them. As the beast attacks Sanjay, he has the idea to break his action figure and use it to reignite the fire.

The room is flooded with a surreal light, and three gods appear and proceed to face the beast. They ring a bell, whose vibrations destabilize the monster, but it reacts by destroying the bell. Sanjay realizes that the central fireplace can act as a large bell, and hits on it as hard as he can. The massive vibration causes the creature to fade away, appeased. The gods give Sanjay their blessing and give him his repaired action figure.

Back in the real world, Sanjay's father is discouraged and allows him to return to the TV. However, he is surprised when Sanjay shows him a drawing the three gods, along with the words "Sanjay's Super Team", and the father and son bond over it.

The short is based on Patel's own personal experience as the child of Indian immigrants and the struggle he had with his cultural heritage. His family owned a motel on Route 66, which is the basis for the setting of the short.[1] 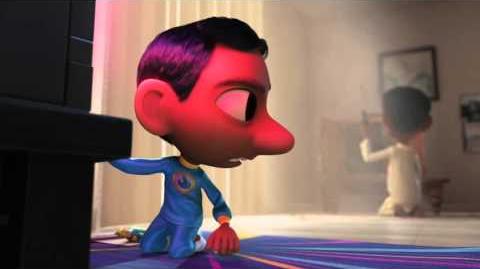 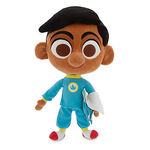 A plush of the main character 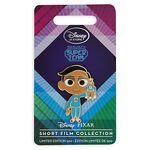