Disney Wiki
Register
Don't have an account?
Sign In
Advertisement
in: Characters, The Nightmare Before Christmas characters, Males,
and 17 more
English

Santa Claus (or Sandy Claws, as Jack Skellington calls him) is one of the central characters of Tim Burton's 1993 stop-motion Disney film The Nightmare Before Christmas. He is a joyful man that delivers gifts to children in the Real World, and is later kidnapped by Boogie's Boys on Jack's commands, preventing him from doing his job.

Santa seems to usually have a smile on his face, as he is jolly, fun, caring, and, well, good with children. As evidenced by his Good/Bad children list, he is fair and thoughtful, too. However, when he deals with Halloween Town, he becomes much more serious - and when captured, he yells and struggles.

Upon his rescue, Santa gruffly informed Jack that Christmas could still be saved; this shows that while he was thankful for being saved from Oogie, Santa was still angry with Jack for attempting to takeover his holiday. Santa kindly refers to Sally as "the only person who makes any sense in this insane asylum".

Santa Claus is a very obese man dressed in a faded red, white fur-lined coat closed with a black belt. His very tiny hands are covered by black gloves that also have white fur lining. His feet and legs, though usually hidden by his coat, are even smaller than his hands, and covered by black boots. His buttocks are huge (as is shown when Lock, Shock, and Barrel try to shove him down the tiny pipe). His hat is also red and lined with white fur, and ends in a white fur ball. The hat itself is quite long and thin. Santa has white hair and eyebrows, and a very long, thick beard that nearly reaches the floor. His cheeks and bulbous nose are faintly pink, as are his lips.

Santa Claus originally appeared in the 1993 movie The Nightmare Before Christmas. In the movie, Jack orders Lock, Shock, and Barrel to kidnap Santa Claus so that Jack can take over Christmas. He wants the trio to take Santa to their lair, but they instead take him to Oogie Boogie. Sally, who doesn't like Jack's idea of taking over Christmas, is worried about Santa Claus and wants to save him, but when she finds him, she is also captured by Oogie Boogie. Later, Jack hurries back to Halloween Town to save Santa and Sally. When Jack defeats Oogie Boogie and all of his bugs started falling, Santa manages to squash the last bug screaming "My bugs!". Jack then apologizes to Santa, who then leaves to fix Christmas. He flies around the world and delivers real presents to all the children. He and Jack also wish each other Merry Christmas and Happy Halloween as Santa brings snow to the town.

An emoticon version of Santa Claus appears in the As Told by Emoji retelling of The Nightmare Before Christmas. 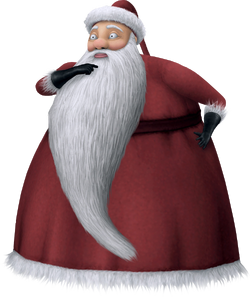 Santa Claus appears as a character in the Halloween Town world of Kingdom Hearts II. He is the leader of Christmas Town and is constantly asked questions about Christmas by Jack Skellington. At one point, he also tells Jack not meddle in things like "last time" within earshot of Sora and his friends, causing Jack to explain it was a long story.

During Sora's second visit, Santa's presents get stolen by Dr. Finkelstein's Experiment. He helps Jack make decoy presents to attract the Experiment, from which Jack and company hide in to ambush and defeat the Experiment. Santa Claus decides to give Jack a taste of what it's like to deliver Christmas presents. When Jack finishes delivering presents, Santa takes back his sleigh and brings forth beautiful snow drops as a present to those in Halloween Town.

The Disney Wiki has a collection of images and media related to Santa Claus.