Curly from The Three Stooges

Being rejected by men, displeasing Winifred, being abused by Winifred, Mary's clumsiness, bright light, not being able to find a love-life, being called ugly, not having fun, being insulted

Sarah Sanderson is one of the two secondary antagonists of Disney's 1993 film, Hocus Pocus and its upcoming 2022 sequel, alongside her sister, Mary. She is the youngest and most beautiful but air-headed witch who lived during the time of the Salem Witch Trials, along with her two sisters Winifred and Mary.

After three hundred years, Sarah and her sisters were awoken from the dead by Max Dennison and wanted to stay alive and young forever by kidnapping children and stealing their souls. She was responsible for luring children to their cottage by hypnotizing them with her singing.

Sarah and her two older sisters live in a cottage on the outskirts of Salem in the late 1600's. At one point in time, she had a relationship with William "Billy" Butcherson, a lover of her oldest sister Winifred's. Unfortunately, when she caught them together, Winifred jealously poisoned Billy and sewed his mouth shut with a dull needle so he couldn't reveal her secrets, even in death. Ever since then, their sister Mary has to act as a peacemaker between both of them.

Sarah is extremely flirtatious and enjoys "playing" with people, men and young boys in particular. As she has a sadistic sense of humor, it is strongly implied that "playing" with people means torturing them or simply engaging in inappropriate relations. Even so, she is very obedient to her eldest sister Winifred and would unlikely be as evil as she is without her guidance. Although Sarah is an airhead (much to Winifred's frustration) and often says or does stupid things, her unique power -her enchanting, siren-like voice- make her a very powerful, dangerous, and valuable witch. With her voice, she has charmed all of the children of Salem, using the song quoted above. She also has a one-sided crush on Max, which makes her an ephebophile because of the age difference, and because she also had feelings for Thackery when he was young.

She has long, wavy light blonde hair and very fair and flawless skin. And she has a very elegant slender frame figure. She dresses in shades of purple including a bodice with flowery embroidery and lacy sleeves, a deep purple skirt over another, redder skirt with a slit up the side, and stockings with black boots. When outside or flying, she wears a hooded purple cloak.

Sarah has the power to mesmerize and lure children through her very powerful singing voice, a form of hypnosis or mind control which seems to have potent effects as children under this magic seem truly bewitched. She is also a competent spell-caster, and with the help of the sisters transformed Thackery Binx into his cat form by reciting an incantation from Winnie's spell-book together. She can also brew potions with the help of her sisters in order to create the life potion, allowing them to absorb the life forces of children. She is also an experienced at flying with a broomstick, by which she could fly using a mop as an alternative.

The Sanderson Sisters, now graying and stooped with age, send Sarah out to lure a child to their cottage so that they may steal their life force to restore their own youth and vitality via a special potion. With the entrancing power of her voice, Sarah lures a young girl named Emily Binx into their cottage in the woods. However, she is unaware that they were spotted by Emily's older brother, Thackery, and that he is following them.

With a bewitched Emily sitting docilely in a chair, Sarah gleefully helps her two sisters, Winifred and Mary, with the potion. All three are downright giddy that their youth will be restored soon; Sarah even engages in a playful fight with Mary by throwing dead men's toes at each other. However, just after Emily obediently drinks the potion, Thackery interrupts them and attempts to rescue her. Sarah and Mary happily chase him around the room, but he manages to knock them down by shoving their enormous cauldron at them, spilling the rest of the potion in the process. A furious Winifred easily subdues him with her powers before Mary points out that the potion is working: Emily's life force is visible. The sisters eagerly crowd around Emily and suck her life force away until their youth is restored and Emily dies of old age.

Rejoicing at the success of their potion, the witches then turn their attention to Thackery. Sarah suggests that they hang him on a hook and let her play with him, but Winifred sharply rejects the idea. Initially planning to simply kill him, Winifred changes her mind when he calls her a hag and decides that he deserves a harsher punishment. Together with her sisters, she curses him to live forever in the form of a black cat, doomed to live for all eternity with the guilt of his failure to save Emily.

Just after they perform the spell, an angry mob arrives at their cottage, led by Emily and Thackery's parents. Winifred and Mary attempt to barricade the door and convince the crowd that they're merely spinsters spending a quiet evening at home, but Sarah impulsively adds that they've been killing children before her sisters can stop her. Soon enough, the sisters are captured and hanged. But before they die, Winifred casts one final spell declaring that on Halloween night when the moon is full, a virgin will summon them back from the dead, allowing them to once again claim the lives of all the children in Salem.

300 years later on Halloween night, a boy named Max Dennison is begrudgingly taking his little sister, Dani, trick-or-treating, after much pleading. While out, they meet his crush, Allison, who accompanies them. Max wants to impress Allison, so he convinces the others to visit the Sanderson sisters' cottage, now converted to a museum. They break in and Max foolishly lights the candle, still trying to dazzle Allison. He ends up resurrecting the Sandersons. He steals Winifred's spellbook at the behest of Thackery so that the sisters cannot create the potion needed to steal the life force of children and they run.

The children all ran to the cemetery as Thackery led them however the sisters all followed them on their broomsticks and nearly got the book back. However, before they can escape Winifred raises Billy Butcherson, her former lover, back from the dead and instructs him to get the book back before flying away to the outside of the cemetery as they cannot set foot on hallowed ground. According to Thackery, Billy was once Winifred's boyfriend, but when she found out that he was in love with Sarah, she poisoned him and sewed his mouth shut with a dull needle. There they employ the help of a bus driver and ask him to find the children and eventually come across a house owned by a man dressed as the devil who they mistake for their master. They subsequently get into a fight with his wife as Sarah was dancing with him but are scared away by the dog. Outside they find that their broomsticks have been stolen.

The sisters then follow the children to the party where Max's parents are and after being exposed to the room by Max, Winifred takes charge and ridicules him before singing "I Put a Spell on You" therefore enchanting all the adults causing them to dance until they die. After this the children lead the sisters to the school after Allison gets an idea from a restaurant and after unwittingly walking into a kiln they are locked in and the children burn them alive. They come out the chimney in a puff of green smoke.

However, they do not die due to the curse protecting them from death until sunrise and they end up capturing and locking up Jay and Ernie, the two bullies that make fun of Max after they call them ugly chicks. Winifred, desperate for her eternal youth decides to try and make the potion from memory. Sarah, surprisingly, shouts out the correct ingredient but is hushed by Mary who thinks Winifred has all the right answers. At Max's house though he and Allison open the book, therefore, allowing it to send out a signal to the sisters who fly to the house, using a modern cleaning broom, mop, and vacuum cleaner as improvisations for their stolen broomsticks and take the book and kidnap Dani and Thackery. Sarah is instructed to sing her siren song power to all the children of Salem so they will go to the house.

After brewing the potion again they try to get Dani to drink it but are stopped by Max who tricks them into thinking the sun has risen by using the headlights of his parents' car. However, they realize they have been tricked and follow the children back to the cemetery and attempt to get Dani to drink the potion again though Winifred drops it whilst Sarah tries to help Mary escape the children. Max catches it and threatens to smash it though instead drinks it after Winifred says she'll kill Dani if he smashes it. After a struggle with him, they both fall to the ground and she starts to take his life force but the sun comes up. Winifred transforms into stone and explodes while her two sisters implode in purple and orange light.

Sarah will appear in this film.

Sarah makes an appearance in the video game Disney Emoji Blitz. She is a playable character that has the ability to "lure in emojis with her siren song." She and her sisters, Winifred and Mary, are currently the only playable Hocus Pocus characters.

Sarah, alongside her sisters Winifred and Mary, appear in Disney Heroes: Battle Mode, originally for special events during the 2021 Halloween season. In the game, Sarah has Billy as her backup, and her abilities are magic-purple sparks from her left hand, using her siren-like voice, and directing Billy to scare enemies.

When Sarah is defeated in the game, she will spark purple and blast away, alongside with Billy who lost his head upon Sarah's defeat.

Sarah and her sisters began appearing in a special Halloween themed Castle Show at Disney's Magic Kingdom in 2015 as a part of Mickey's Not-So-Scary Halloween Party. Sarah kicks off the festivities by sending out the call to fellow villains by singing "Come Little Children".

After completing their potion, she and Mary back up Winifred as she sings "I Put a Spell on You" and dances with various villains.

”I lured the child here.”

”I am beautiful! Boys will love me!”

Sarah screams as Winnie chokes her.

Sarah prepares to sing during the hanging. 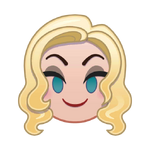 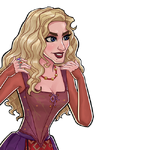