Mount Olympus
The Satyrs, also known as Fauns, are one of the main protagonists in "The Pastoral Symphony" segment of the 1940 film Fantasia.

The Satyrs appear to be based off of the Greek mythological creature of the same name. However, unlike Greek legends, they are depicted as little boys, possibly to reflect their child-like natures. The Satyrs' hair and legs are in a various arrangement of colors, most often in delicate pastel colors to reflect on the segment's title.

Not much is known about their personality, but what can be gathered, from their body language, is that they are childlike and innocent.

The satyrs make their debut frolicking in the flower fields and open-air temples of ancient Greece along with their friends, the Unicorns, playing and generally having a good time. They attend a wine festival with the Centaurs, Centaurettes, Cherubs, Unicorns, Bacchus, Jacchus, and the zebra Centaurettes, soon their fun was spoiled when Zeus came to ruin everything, when the storm stop, they (along with the cherubs, unicorns, Peter Pegasus, and the Pegasi Siblings) play in Iris' rainbow, then one satyr goes to sleep with Brudus and Melinda under a tree after Morpheus' arrival.

Concept art of the fauns. 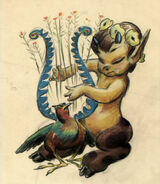 The fauns and pegasi in a color piece.

Concept art from the Pastoral scene. 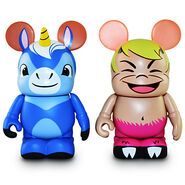