$125 million
Saving Mr. Banks is a 2013 biographical drama film about the production of the popular 1964 Walt Disney Productions film, Mary Poppins. The film stars Tom Hanks as filmmaker and mogul Walt Disney himself and Emma Thompson as author P.L. Travers. Directed by John Lee Hancock from a screenplay by Kelly Marcel, filming started on September 19, 2012. Walt Disney Pictures released the film on December 13, 2013, which received an Academy Award nomination for Best Original Score.

The film, set in 1961, begins in London. Agent Diarmund Russell urges financially strapped author Pamela "P. L." Travers to travel to Los Angeles and meet with Walt Disney. Disney has been courting Travers for 20 years, seeking to acquire the film rights to her Mary Poppins stories, on account of his daughters' request to make a film based on the character. Travers, however, has been extremely hesitant toward letting Disney bring her creation to the screen because he is known primarily as a producer of animated films, which Travers openly disdains. Having written nothing new and her book royalties dried up, she risks losing her house. Russell reminds her that Disney has agreed to two major stipulations—no animation and unprecedented script approval—before she finally agrees to go.

Flashbacks depict Travers' difficult childhood in Allora, Queensland, Australia, which became the inspiration for much of Mary Poppins. Travers idolized her loving, imaginative father, Travers Robert Goff, but his chronic alcoholism resulted in his repeated dismissals, strained her parents' marriage, and caused her distressed mother's attempted suicide. Goff died from tuberculosis when Travers was seven years old. Prior to his death, her mother's stern, practical sister came to live with the family, and later served as Travers's main inspiration for the Mary Poppins character.

Upon her arrival in Los Angeles, Travers is disgusted by what she feels is the city’s unreality, as well as by the naïve optimism and intrusive friendliness of its inhabitants, personified by her assigned limo driver, Ralph. At the Walt Disney Studios in Burbank, Travers begins collaborating with the creative team assigned to develop Mary Poppins for the screen, screenwriter Don DaGradi (Bradley Whitford), and music composers Richard and Robert Sherman (Jason Schwartzman and B.J. Novak respectively). She finds their presumptions and casual manners highly improper. She meets Disney in person, and he is jocular and familiar from the start, but she remains unfriendly, despite Disney assuring her that they will make something wonderful and that nothing will happen without her approval.

Travers’ working relationship with Disney and his creative team is difficult from the outset, with her insistence that Mary Poppins is the enemy of sentiment and whimsy. Disney and his associates are puzzled by Travers’ disdain and/or disapproval for fantasy, given the fantastical nature of the Mary Poppins story, as well as Travers’ own richly imaginative childhood existence. Travers particularly objects to how the character George Banks, the children's estranged father, is depicted, insisting that he is neither cold nor cruel. Slowly, Disney and the team begin to grasp how deeply personal the Mary Poppins stories are to Travers, and how many of the work’s characters are directly inspired by Travers’ own past.

Travers' collaboration with the team continues, with the team realizing that some of Travers' criticisms are valid and begining to make changes, although she is increasingly disengaged as painful memories from her past numb her in the present. Seeking to find out what’s troubling her, Disney suggests the two of them go to Disneyland. The visit to Disneyland, along with Travers’ developing friendship with her limo driver, the creative team’s revisions to the character of George Banks, and the insertion of a new song to close the film, help to soften Travers. Her imagination begins to reawaken, and she engages enthusiastically with the creative team. This progress is upended, however, when Travers is outraged to discover that an animated sequence is planned for the film, since she has been adamant from the start that any animated sequences would be unacceptable. She confronts Disney over this and returns to London without signing the film rights.

Disney discovers that Travers is writing under a pen name. Her real name is Helen Goff, and she’s actually Australian, not British. Equipped with new insight, he departs for London on the next flight. Appearing unexpectedly at Travers’ residence, Disney opens up—describing his own less-than-ideal childhood, while stressing the healing value of his art—and urges Travers to shed her deeply-rooted disappointment with the world and not let it dictate the present, while promising the film will be amazing and George Banks' storyline will move a lot of people. After Disney leaves, Travers relents and grants him the film rights.

Three years later, in 1964, Mary Poppins is nearing its world premiere at Grauman's Chinese Theatre. Travers has not been invited because Walt fears that she could give the film negative publicity. Goaded by her agent, Travers returns to Los Angeles, showing up uninvited in Walt Disney’s office, and finagles an invitation to the grand world premiere, attended by all the cast and crew of the film. She watches Mary Poppins initially with a lack of emotion, particularly during the animated sequences. She slowly warms to the film, however, and is ultimately surprised to find herself overcome by emotion, touched by the depiction of George Banks’ personal crisis and redemption, which clearly possesses a powerful personal significance for her.

Marcel's screenplay is listed in film executive Franklin Leonard's 2011 Black List, voted by producers, of the best screenplays that are not in production. According to the 40th Anniversary DVD release of the film in 2004, Disney had been working since the 1940s to acquire the rights to the book that was written in 1934, as a promise to his two daughters, but Travers had great misgivings about how her stories would be filmed. She finally relented and allowed Disney to film the story but was so disappointed with the animated portions of the film that she refused to allow any other stories to be filmed.

Although some of the filming was originally to be in Queensland, Australia, all filming took place in the Los Angeles area, including Disneyland and at the Walt Disney Studios. Filming was completed around Thanksgiving 2012, and the film was released on December 20, 2013.

For the Disneyland sequences, Disney blocked off certain parts of the theme park from November 6 to 7, 2012 (such as Disney California Adventure and Sleeping Beauty Castle, the former of which didn't exist yet). The park's cast members and several hundred guests were also hired as extras.

Saving Mr. Banks holds a 79% 'Certified Fresh' rating on Rotten Tomatoes, based on 231 reviews with an average score of 7/10. Critics praised the 'charming nature' of the film, and the believable depictions. However, some criticism was attracted by the 'Disneyfication' of the film, with A.A. Dowd of the AV Club saying:

"The irony of Saving Mr. Banks is that it takes this true story of Hollywood conflict, of artistic integrity pitted against studio moxie, and gives it the same warm-and-fuzzy treatment the company gave Poppins."[1]

The film grossed $83.3 million in North America and a further $29.2m in the rest of the world. At $9.3 in the opening weekend, it finished fifth in the box office.

Tom Hanks and Emma Thompson, along with several park guests

The title featuring the silhouette of Mary Poppins

Tom Hanks as Walt Disney in Disneyland; several guests are in the background

Emma Thompson as P.L. Travers at the Mary Poppins Premiere

Disneyland during filming with park cast members as extras 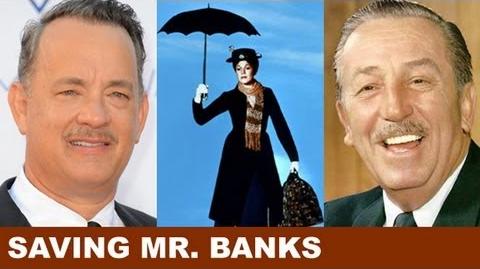 Saving Mr. Banks Update with Tom Hanks as Walt Disney - Beyond The Trailer-0 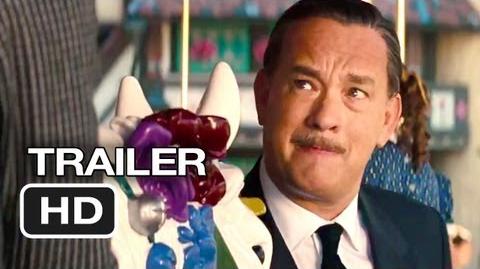