Miles from Tomorrowland
"Scavengers of Mars"

The Cosmic Explorers soon arrive at Olympus Mons but wonder where Professor Rubicon is, as he was suppose to meet them when they arrived. Just then Miles spots a holo projector which he activates, projecting a holographic projection of Professor Rubicon, who gives them their first clue: Mars has two hiding in view, don't look around whatever you do. The Cosmic Explorers begin to think and for a while no one seems to know the answer. They look down to the ground and then up at the sky where Loretta sees the answer: the two moons that orbit Mars, Phobos and Deimos. Miles takes a photo and Professor Rubicon congratulates them before giving them their second clue, which is an image of a place on Mars that looks icy and cold. They are instructed to find it an take their own picture. Rygan believes it to be one of the Polar caps, and according to Loretta's Bracelex the north pole is currently experiencing winter, making that their next destination. The Cosmic Explorers soon arrive at the north pole and soon find the place that matches their clue. After landing they get M.E.R.C. to take a photo with them in it. Then Miles turns to another holo projector and activates it, projecting Professor Rubicon. He congratulates the Cosmic Explorers and gives them their third clue, which are a set of directions to the last location on their scavenger hunt. The Cosmic Explorers leave the north pole and follow their given directions, and after passing through a dust devil they reach their final destination, Valles Marineris, the biggest canyon on Mars. Loretta takes a photo and the Cosmic Explorers have completed their scavenger hunt with a few minutes to spare.

While Loretta, Popp and Blodger head back, Miles decides to take one more photo before leaving. Suddenly Rygan falls of the edge of drop and falls down some kind of airlock mounted into the ground below. Miles, Haruna and M.E.R.C. come down to investigate and find Rygan who has discovered huge dark cave full of bamboo trees. When he finds some kind of vehicle he accidental starts it up and gets trapped inside it. Miles, Haruna and M.E.R.C. go down into the cave to rescue him but end up getting lost in the bamboo forest. Miles tries to contact help but is unable to get a signal. Just then Miles, Haruna and M.E.R.C. they hear something approaching them, only to realise it was just Blodger, Loretta and Pipp looking for them but ended up getting lost in the bamboos themselves. Now all together, Miles instructs everyone to split up and search the Bamboo forest for Rygan.

Miles and M.E.R.C. search for Rygan together and spot him passing by on that vehicle he's trapped on. They soon catch up with him and stop the vehicle just before it was about to over a cliff. With Rygan safe the Cosmic Explorers are all together once again and discover some kind of abandoned facility at the bottom of the cliff. After showing Professor Rubicon what they have found, they return to the station where Professor Rubicon identifies the Cosmic Explorers' discovery to be the long lost Mars Colony, which was once populated by the first Mars Colonists and had up till now been lost for centuries. Professor Rubicon is pleased by their discovery, but since they failed to complete their scavenger hunt in the time allowed none of them get to earn their Mars Holo-Badges. Despite failing their assignment, the Cosmic Explorers still made a very important discovery and as a result they have earned the gratitude of the Tomorrowland Transit Authority and special T.T.A. Holo-Badges which are only given when an amazing discovery is made. The Cosmic Explorers are delighted to earn these holo-badges and celebrate blastboarding at the north pole. 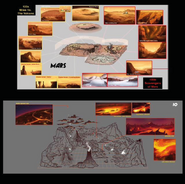