Disney Wiki
Register
Don't have an account?
Sign In
Advertisement
in: Objects, The Avengers, Weapons,
and 8 more
English

The Avengers
Captain America: The Winter Soldier (cameo)
Guardians of the Galaxy (hologram)
The Avengers: Age of Ultron
Avengers: Endgame

The Scepter was used by Loki in the 2012 film, The Avengers and it seen in the 2014 film, Captain America: The Winter Soldier and later in the 2015 film, Avengers: Age of Ultron to create Ultron. It was given to him by Thanos. The staff utilized a yellow Infinity Stone inside the blue gem, after Loki's defeat and after his redemption and change of heart the scepter would be taked by HYDRA before being recovered by the Avengers.

The scepter has a long golden handle and a black fitting which held a yellow stone inside the blue gem encircled with silver blades. It allows its owner to open rifts through dimensions with the Tesseract as a gate key, fire powerfully destructive blue blasts of energy and bend the wills of others by controlling their hearts. The gem's influence controlled Loki's mind while he wielded it, turning his green eyes blue, which it also did to anyone whose chest he put the tip of the staff to, turning them into a puppet of his. This meant that while the Tesseract through the scepter had a grip on Loki's mind and mainly drove his actions, raising his hatred and desire to do harm higher than what they had been, he still retained his will.

Loki used the scepter to brainwash Hawkeye, Dr. Selvig, and numerous S.H.I.E.L.D. agents into his followers, turning their eyes crystal blue like his. He could transform it at will from its long, fully-extended appearance to its smaller but equally deadly form the same way he transformed his own appearance with and without his full body armor and cape. He also disguised it as a walking cane when disguising himself amongst humans. The staff also functioned as a spear, being able to violently impale and slash enemies, besting most in combat with ease. It was even strong enough to match Thor's mighty hammer Mjølnir in close-quarters combat.

The Scepter appears as it is being researched by HYDRA, under the order of Baron Strucker. Strucker also viewed it as such a key component to HYDRA's plans that he decided to allow the authorities to take down HYDRA's cells after they were exposed via data leaks by Fury and Romanov.

The Mind Stone appeared on a video footage as The Collector was giving Star-Lord, Gamora, Rocket Raccoon, and Groot the history of the Infinity Stones.

The scepter appears in the episode " The Dirty Half Dozen" when Raina has a vision and forsees the destruction Ultron will bring.

The Chitauri Scepter first appears in the HYDRA's base in Sokovia, where the Avengers fought to retrieve it. The Avengers discover that HYDRA has been using the Scepter in experiments, and that they succeeded to enhance two individuals, the twins Wanda and Pietro Maximoff.

After they recovered the scepter, Stark used it to create Ultron, however Ultron went rogue. Ultron later stole it and used it in Helen Cho in order that her built a new body for him. With the new body ready, Ultron revealed that the gem was an Infinity Stone.

The Chitauri Scepter appears when Captain America, Hulk, Iron Man and Ant-Man time travel to 2012 to steal the Infinity Stones in New York, and Captain America ends up being the one responsible to get the specter. He takes the scepter, which is inside a suitcase, from a group of HYDRA agents. Cap then confronts the past version of himself, who thinks that he is Loki disguised trying to steal the suitcase with the scepter.

The scepter appears in a flashback that shows how HYDRA made experiments with the Mind Stone. Wanda, as a volunteer to the experiment, is seen approaching the scepter when she is instructed to touch the Mind Stone, which results in enhancing the dormant powers she already had. 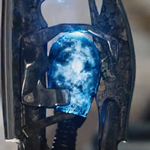