This article is about the object from Elena of Avalor. For the episode of the same name, see The Scepter of Light.

The scepter is comprised of goldenrod with blue gems on each side of the base and end of the rod. Near the head of the rod is an engraved bracing with two wing-like panels pointed outward. A cyan diamond is held at its base by ornate, curved brackets.

The Scepter is so named because it grants its bearer the ability to harness the Powers of Light. The Light Powers the Scepter unleashes are strong enough to send those who embrace the Powers of Darkness (such as Orizaba) to the Spirit World. These powers can be unleashed by a single thought put into a single word. The drawback is that the more the bearer uses its powers, the more drained the bearer will become. However, After Elena fell into the Well of Crystals in Takaina, the Scepter became crystallized and more powerful as it can deflect spells and the drawback has been nullified. Additionally, it only works in the hands of the good.

The words and their effects are as follows:

"Is it supposed to do this?"

Quita Moz explains the scepter's been damaged by dark magic. 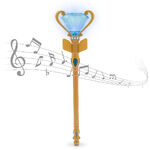 Another Scepter of Light toy