"Long, long ago, the world was one. Man and machine spoke the same language. The flowers sang, and the trees danced. And the desert was alive."
Schadenfruede is a minor character from Fireball, a Japanese CGI television show produced by Disney and Jinni's Animation Studios for Disney Channel Japan. The character only makes three visible appearances in the series, although he can be heard in five, and seems to have no real goals or purpose except comic relief, until the last episode. Although, the character's gender is never revealed in the series, the recording it plays is masculine, and in the Fireball Special, Gedächtnis calls Schadenfreude a "he", so male has been assumed.

Schadenfreude's personality does not vary much from that of the average monkey. He is almost constantly moving whenever he is present and appears to simply be curious. He even has an interest in bananas as displayed in episode 11 ("Intruders"). Since he cannot communicate with either Drossel or Gedächtnis due to his monkey cry audio, it difficult to conclude his thoughts. However, it can be assumed he likes Drossel and Gedächtnis since he grips onto Drossel for quite a while and bounces on top of Gedächtnis's head.

Much like a real monkey, Schadenfreude's body is light and agile. His limbs are elongated for both bipedal and quadrupedal movement, and his frame is light enough for him to jump to great heights. Similarly to a monkey, Schadenfreude does not have thumbs, however, his hands and feet use a system of two plates instead of fingers. Schadenfreude also has a prehensile electrical cord type tail that allows him to grip onto the ceiling and other objects. Although Schadenfreude's frame enables quick mobility, its lightness appears to have made Schadenfreude somewhat fragile, as a small fall caused damage to his eye. Similarly to Gedächtnis, Schadenfreude uses a single lightbulb eye (like a pit droid or Pixar lamp) to see, instead of possessing the apple-shaped face monkeys are known for. His design also seems to feature ears, as his head has two screws sticking out on either side.

"Demon of the Frontal Lobe"

In the fifth episode, Schadenfreude's has a very brief part and no actual visible appearance on screen. After Drossel falls inside Gedächtnis's head while trying to locate the source of his discomfort, she reappears and says "Monkey!". Both Drossel and Gedächtnis are then slightly frightened by the sound of one of Schadenfreude's cries that echoes as the episode ends. (Although it is never explained, since Gedächtnis's head seems to lead anywhere, it is possible that Die Schadenfreude was inside his head).

"The Monkey in the Seat"

"Intruders" (Episode 11) is the first episode that actually features Schadenfreude in person. While Drossel is practicing karate (its Capoeira actually), she becomes concerned that there are spies. Just as Gedächtnis is about to explain that it is not possible for Tempest Tower to be breached, Schadenfreude randomly appears. Drossel wonders if he bites, and Gedächtnis suggests she not appear as a threat. Schadenfreude makes Drossel feel uncomfortable at first, and she makes fun of him by saying there is a banana behind him. Eventually enjoyed by the episode, she takes Schadenfreude's hand and walks off the set.

Schadenfreude appears again in this episode. This time Drossel is complaining about him. He wraps around her, jumps on Gedächtnis's head, hangs from the ceiling, and even sits on Drossel's head. Unfortunately for him, he loses his balance and false to the ground, causing his lightbulb eye to fall and roll into a pile of more lights of the same size and in different colors. Drossel puts a blue light into his head. Although it is never exactly explained, it appears that the wattage of the bulb was too high, as it causes Schadenfreude to fall paralyzed in order to activate the bulb.

"Where Dreams are Born"

In the final episode, Schadenfreude has a short role. When Gedächtnis is about to read the writings of Lord Windstille, "A New Hope", Schadenfreude plays a recording of the message while moving his feet. He then narrowly escapes being crushed by a piece of the ceiling, as the top of the Tempest Tower is destroyed, and leaves the scene.

Schadenfreude hanging from the ceiling. 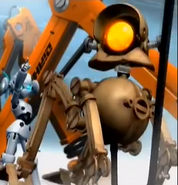 Gedächtnis and Die Schadenfreude behind the scenes.
Add a photo to this gallery
Retrieved from "https://disney.fandom.com/wiki/Schadenfreude?oldid=3898758"
Community content is available under CC-BY-SA unless otherwise noted.