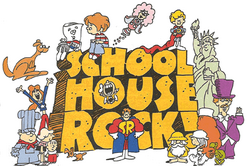 Schoolhouse Rock! is a series of animated musical educational short films that aired during Saturday morning children's programming on U.S. television network ABC. Topics covered include grammar, science, economics, history, mathematics, and politics. The series aired between 1972 and 1986, and infrequently during the 1990s and 2000s, with new shows created between 1993 and 1996, until its cancellation by ABC in 2001.

Schoolhouse Rock! began as a commercial advertising venture by David McCall. The idea came to McCall when he noticed one of his sons, who was having trouble in school remembering the multiplication tables, knew the lyrics to many current rock songs. The first song recorded was "Three is a Magic Number", written by Bob Dorough. It tested well, so a children's record was compiled and released. Tom Yohe listened to the first song, and began to doodle pictures to go with the lyrics. He told McCall that the songs would make good animation.

When a print workbook version fell through, McCall's company decided to produce their own animated versions of the songs, which they then sold to ABC (which already was McCall's company's biggest advertising account) based on a demo animation of the original "Three is a Magic Number" for its Saturday morning lineup. They pitched their idea to Michael Eisner, then vice-president of ABC's children's programming division. Eisner brought longtime Warner Bros. cartoonist/director Chuck Jones to the meeting to also listen to the presentation. The network's children's programming division had producers of its regular 30- and 60-minute programs cut three minutes out of each of their shows, and sold General Foods on the idea of sponsoring the segments. The series stayed on the air for 12 years. Later sponsors of the Schoolhouse Rock! segments included Nabisco, General Foods, Kenner Toys, Kellogg's, and McDonald's.

The last of the original series were four segments about the then-novel personal computer technology. The shorts featured two characters by the name of Scooter Computer and Mister Chips, and so these were the only episodes in the series to feature any recurring characters.

A 1987 production of the series for VHS tape featured Cloris Leachman opening the collection and some songs with child dancers and singers but "Three Ring Government", "The Good Eleven", and "Little Twelvetoes" were not included on the videos. [1][2]

In the 1990s, the team reunited to produce Money Rock and two more Grammar Rock segments ("Busy Prepositions" and "The Tale of Mr. Morton").

ABC stopped regular broadcasts of this series in 2001.

In 2002, the team once again reunited to produce a new song, "I'm Gonna Send Your Vote to College" for the release of the 30th Anniversary DVD. The song teaches about electoral college. For the new song, Tom Yohe Jr. took over as lead designer for his father Yohe Sr., who had died in 2000.[2] Another contemporary song, called "Presidential Minute", which explained the process of electing the President of the United States in greater detail, was included on a 2008 DVD collection centered on the America Rock subseries.

In 2009, the team produced eleven brand new environmentally-themed songs for the DVD Schoolhouse Rock: Earth Rock. They also made a rendition of their 2006 song, "The Three R's" by Jack Johnson.

in 2018 The Library of Congress inducted all songs from Schoolhouse rock into the National Recording Registry for being "culturally, historically, or aesthetically significant"

No shows were produced featuring the numbers 1 or 10 explicitly.

In 1973, Capitol Records released a soundtrack album of Multiplication Rock, featuring all 12 songs. Two tracks: "My Hero, Zero" and "Three is a Magic Number" had been edited for TV to keep each video within three minutes. This LP features both songs in their full, unedited forms. Also, the album version of "The Four-Legged Zoo" has a slightly different ending than the television version.

"I'm Gonna Send Your Vote to College" was produced for the 30th anniversary DVD collection.

"Presidential Minute" was promoted as produced for the Election DVD collection, but its presence as an Easter Egg on the 30th Anniversary DVD suggests that it was written before 2008.[4]

Copyright issues between Ringling Bros. and Barnum & Bailey prevented The Greatest Show on Earth to be further aired on television.

Several tie-ins were released in 1996:

In addition to the above, Rhino Records also released Schoolhouse Rocks the Vote!: A Benefit for Rock the Vote, a tribute album containing covers and original songs in the style of Schoolhouse Rock, all with an electoral theme. It was released on August 18, 1998.

On August 26, 2002 Buena Vista Home Video released a 2-disc DVD featuring 51 of the 52 episodes (the only one missing being the presumed-lost Computer Rock segment) as well as many special features. The release coincided with the 30th anniversary of the show. An abbreviated VHS, featuring the "top 25" episodes plus "I'm Gonna Send Your Vote to College," was released at the same time. On September 23, 2008, the "Schoolhouse Rock-Election Collection" was released, including 14 songs about the history and the government and a "new to DVD" song.[6]On March 31, 2009, Buena Vista Home Video released "Schoolhouse Rock Earth" on DVD, which includes 10 newly written and animated songs. 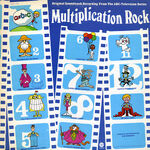 Retrieved from "https://disney.fandom.com/wiki/Schoolhouse_Rock!?oldid=4012135"
Community content is available under CC-BY-SA unless otherwise noted.