Robert Scott Adsit is an American actor, voice actor, comedian, and writer who is best known for his role as Pete Hornberger in 30 Rock from 2006 to 2013.

For Disney, he provided the voice of Baymax in the 2014 Disney animated feature film, Big Hero 6 and reprised the role in the Disney Infinity series, the television series of the same name, and the video game Kingdom Hearts III. 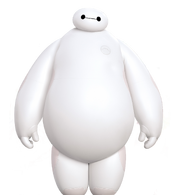 Scott Adsit behind the scenes of Big Hero 6.

Scott Adsist and Ryan Potter at the Big Hero 6 premiere in November 2014.