Jacquie Figg (1999-present)
Scott David Menville is an American actor, voice actor, and musician, who is best known for his voice work in animated films and television series, including Robin in Teen Titans and Teen Titans Go!, Ma-Ti from Captain Planet and the Planeteers, the titular character in The New Adventures of Jonny Quest, Quicksilver in The Super Hero Squad Show, and Lloyd Irving in the video game Tales of Symphonia.

Menville is the son of Chuck Menville, writer of the The Little Mermaid episodes "Thingamajigger" and "Eel-Ectric City". 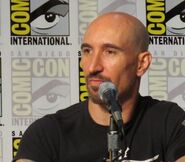