The Scout Rover (often called the Scout for short) is a ground vehicle that appears in the Disney Junior animated series Miles from Tomorrowland. Used by the Callisto family, the Scout Rover is an all terrain land vehicle designed for scouting. It is equipped with airless tires, carries up to four or five passengers and can reach speeds fast enough to outrun a planetary flood. Loretta Callisto constructs a similar vehicle in "Building Day." 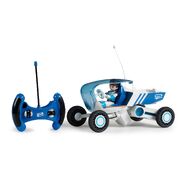 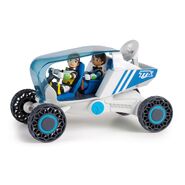 Retrieved from "https://disney.fandom.com/wiki/Scout_Rover?oldid=4051307"
Community content is available under CC-BY-SA unless otherwise noted.