Galactic Empire
First Order
The Scout Troopers were specially trained soldiers of the Galactic Empire and the First Order. As light-armored variants of the Imperial Stormtroopers, Scout Troopers were specifically trained for activities too complicated for regular infantry troopers. known as biker scouts. As such, they were exceptional additions to the Imperial Military as reconnaissance troops, spies, and survivalists. They were especially excellent marksmen, and thus they were regarded as the finest snipers in service to the Galactic Empire. Hence, they were particularly useful as assassins.

Their wide-range of skills inevitably created feelings of pride and self-importance amongst the scout troopers. As a consequence of their bravado, they developed a fierce rivalry with their infantry counterparts, as well as everyone else in the military who was of equal or lower rank. Their most infamous activity was arguably in the Battle of Endor in 4 ABY. Although they were stationed in an environment most suited to their training, the scout troopers were unable to prevent a small team of Rebel soldiers from destroying the shield generator that protected the incomplete Death Star II. An entire legion of Emperor Palpatine's best soldiers, including many scout troopers, were annihilated by a few Rebels, assisted by the Ewoks, an indigenous species of Endor. 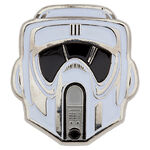