Active
Scratchy is a minor character in Lady and the Tramp II: Scamp's Adventure, sequel to the 1955 film. He is one of the members of the Junkyard Dogs.

Scratchy is an old-timing Junkyard Dog like Sparky who appears to have fleas on him all the time. He is a brown mongrel with a tan belly, dark brown ears, and a slight loss of fur on his left arm and tail.

He doesn't talk or do much other than scratch himself each time he has fleas and help his friends out with something. He eventually leaves the junkyard with the other Junkyard Dogs minus Buster, and gets adopted by a family along with Sparky. 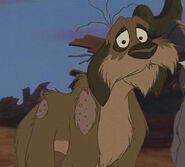 Scratchy howling with the other Junkyard Dogs

Scratchy and the other junkyard dogs with their new owners