The Scream/Laugh Canister is an object in the Disney/Pixar Monsters, Inc. franchise. Their purpose is to store up the scream energy of human kids that the Scarers collect. Each scream canister would be taken to a different room in the factory, where the screams would be extracted and refined into energy.

A notable scream canister belonged to Dean Abigail Hardscrabble, the Dean of the School of Scaring at Monsters University. This canister contained the scream Hardscrabble collected during her old career as a Scarer, which broke the All-Time Scare Record. However, it was accidentally knocked over from its pedestal by Sulley when he and Mike were trying to scare each other. The canister clattered on the ground, loosening its containment-lock, and unleashing the scream inside, causing it to fly about the Scaring School's lecture hall until the scream ran out and it broke. At first, Hardscrabble "appeared" to take the loss of her "one souvenir from a life-time of Scaring" rather well, citing, "Accidents happen," and amending the situation since "the important thing [was] no one got hurt." However, Hardscrabble then retaliated against Mike and Sulley by testing them on the spot personally, finding fault in each of them and judging them unfit to continue with the Scaring Program: Mike, because she deemed him, in her professional opinion, not scary, and Sulley for disregarding the study of Scaring.

It is unknown what became of Hardscrabble's canister afterwards. 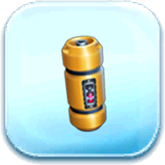 The Canister in Disney Magic Kingdoms

Scream Canister voice recorder from the time of the film's premiere.

As a Badge in Disney Heroes: Battle Mode