Disney Wiki
Register
Don't have an account?
Sign In
Advertisement
in: Characters, The Incredibles characters, Animated characters,
and 6 more
English

The Screenslaver is the secondary antagonist of Disney/Pixar's 2018 animated film Incredibles 2, created by Evelyn Deavor. The goggles he wears serve as the face of her plan to get rid of Supers and to unwillingly place other people in a hypnotic trance on her behalf so no suspicion would be placed on her.

During the grand opening of the New Urbem monorail, the conductor of the train is mesmerized by patterns appearing on his monitor to set the train in reverse. Elastigirl successfully saves the passengers and confronts the driver, but finds the latter has no memory of his actions, and what is left on the monitor is a cryptic message to Elastigirl written by someone called "The Screenslaver". When Elastigirl is invited to an interview, the Screenslaver hijacks all of the station's monitors, where he speaks through the interviewer to Elastigirl, taunting her of his plan to assassinate the visiting ambassador. Rushing outside, Elastigirl finds out the Screenslaver has brainwashed the pilots on the helicopters accompanying the ambassador, as they start firing on each other. Fortunately, Elastigirl rescues the ambassador in time to foil Screenslaver's plan.

The Screenslaver's hood is claimed by DevTech as another victory for Elastigirl, although Elastigirl decides to examine footage from their encounter, sensing something was not right. Elastigirl then notices the Screenslaver owned a television set in his apartment, in which one of the monitors showed the image of Elastigirl's camera that Evelyn had implanted in her supersuit. She wonders why Screenslaver would have one if he was controlling through monitors and how he could access her camera; reaching inside the Screenslaver's mask, Elastigirl discovers a pair of Hypno-goggles, figuring out that Screenslaver was in turn being controlled, but she is suppressed when Evelyn (the true mastermind behind Screenslaver) forces the goggles on her face. 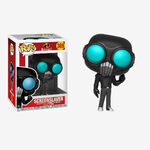 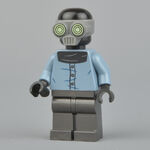 Screenslaver in LEGO The Incredibles 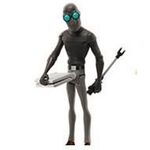 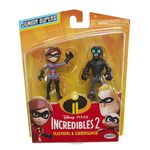