Scrooge McDuck and Money is an animated cartoon featurette made by Walt Disney Productions in 1967.

This short serves as the cartoon debut for Scrooge McDuck, outside of a cameo appearance on the Mickey Mouse Club series. It was also one of the first cartoons that the studio released after Walt Disney's death. This cartoon also realistically addresses the implications of Scrooge's Money Bin, specifically, that he invests most his fortune, and that the Bin only holds a small percentage of it. Disney comics have followed up on the idea; his Money Bin only contains specific wealth that has special nostalgic significance to him or banks simply have no available space for it (in some stories, the idea of keeping all the money in banks is considered but dismissed because they already keep so much of Scrooge's money and cannot take more).

Animation historian Jerry Beck suggests that this short film was likely attached and released theatrically with either The Adventures of Bullwhip Griffin or The Gnome-Mobile.[1]

Scrooge's grandnephews, Huey, Dewey, and Louie, come to Scrooge with their piggy bank in hand, wanting advice on how they can save it and one day become wealthy like Scrooge. Scrooge agrees that the boys should learn more about money, and begins with a history, first talking about ancient forms of money. Proper forms of money were invented to provide a easier way to determine the value of goods. Scrooge then elaborates on the development of coins, paper bills, and finally credit.

When the grandnephews ask why the government doesn't just print more money, Scrooge gives them a brief lesson on inflation, using comparisons to give the boys idea of just how much money is billion dollars actually is.

Finally, Scrooge gives the boys a lesson on budgeting for expenses. Proper budgeting should leave a profit. According to Scrooge, investing the profit was how he obtained his wealth. By using the same strategies, the boys can grow their savings as well. Scrooge leads the boys into his boardroom and accepts their piggy bank, making them stockholders. Scrooge takes a small fee for his time and consultation, informing the boys that good things are never free. The boys leave with a much better knowledge of money and finances. 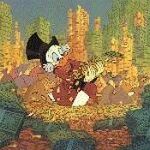 Retrieved from "https://disney.fandom.com/wiki/Scrooge_McDuck_and_Money?oldid=3797967"
Community content is available under CC-BY-SA unless otherwise noted.