November 24, 1987
"Scroogerello" is the forty-seventh episode of DuckTales. As the title suggests, it is a parody of the story of "Cinderella".

Scrooge is suffering from a bad case of fever that he stubbornly refuses to admit having. As Duckworth, Mrs. Beakley, and the nephews try to bring him to bed, he badmouths their help, at one point splattering his cod-liver oil medicine in Duckworth's face. Webby then sits down to read him the story of "Cinderella". As she reads, Scrooge falls asleep and drifts off into an extended dream sequence.

In his dream, Scrooge is stuck in the role of an abused servant named Scroogerello (hence the episode's title), bossed around by his wicked stepbrothers (played by Big Time, Burger, and Bebop Beagle) and stepfather (played by Flintheart Glomgold). One day, he overhears Glomgold and the Beagles discussing Princess Goldie's Pick-A-Prince Ball, which falls tonight; Glomgold plans to have his "sons" charm Goldie as a distraction while they rob the royal treasury. Scroogerello, overhearing their plans, realizes he has to warn Goldie, but the Beagles capture him and lock him in the basement. There, he finds Huey, Dewey, and Louie, who have also been locked down there because the Junior Woodchuck Cookies they were selling gave Burger heartburn (this is shown when Louie drops a cookie and it cracks the floor), as well as Duckworth, whom Glomgold banished to the cellar after trying to give him some cod-liver oil for a cold (in a callback to the opening scene, Scroogerello feels guilty about that).

As Glomgold and the Beagles head off for the ball, Scroogerello wishes that he could do something to save Princess Goldie. At that point, Mrs. Beakley appears as his fairy godmother, accompanied by Webby as a fairy godchild-in-training; they have heard his kind wish and have come to set him free, which they do. Afterwards, so that he will be allowed into the castle, Fairy Beakley turns Scroogerello's rags into a golden tuxedo and top hat, and Webby turns the boys into chaffeurs and their cookies into a carriage.

At the ball, Princess Goldie is not meeting any satisfaction with her potential suitors, and as if that isn't enough, the Beagles are literally pushing the other suitors out of the way. After briefly dancing with the Beagles (and not enjoying it), Goldie sees Scroogerello making his entrance and is immediately lovestruck for him, and the feeling is mutual. Realizing that "this golden stranger" is ruining their plans, Glomgold and the Beagles decide to instead kidnap Goldie and hold her for ransom; and so, they swipe her just as she's introducing "Mr. Right" to her "father", King Gyro.

Scroogerello, the nephews, and Webby attempt to give chase after the villains, but in the course of the chase, the clock strikes midnight. Webby explains that her fairy magic doesn't last past midnight ("'cause it's way past my bedtime"); sure enough, the boys and Scroogerello lose their fancy outfits, and their cookie-based carriage melts into dough, forcing them to continue on foot, following a trail of sequins from Goldie's gown. They eventually reach the castle where Goldie is being held captive, but a hedge maze stands between them and their destination. Out here, they meet the castle's owner, Prince Lilypad McQuack (Launchpad), who was turned into a frog by a witch after crashing his shopping cart into her, and whom Glomgold and the Beagles have forced out of said "cast-le". To help them get through the garden maze, Webby brings the plants to life to rearrange the garden. Glomgold, watching this from the castle's tower, throws a torch at it, burning the plants up, but Webby saves everyone by casting a spell that creates a snowfall that extinguishes the fire.

Just as the good guys make it inside the castle, though, Glomgold and the Beagles surround them, wearing suits of armor. Before the Beagles can attack, though, Scrooge tells them that they can't hurt him, since Lilypad is a magic frog who grants selfish wishes when patted on the head. The gullible Beagles and Glomgold immediately begin to gang up on Lilypad and pat his head multiple times. With the villains distracted, Webby tries to turn them into bullfrogs, but ends up turning them into bulls with frog-like features. The villains give chase after them all the way up the tower, eventually ending up falling into the moat. In the meantime, Goldie, having taken karate lessons, has managed to free herself, but recaptures herself so that "her handsome stranger" can rescue her. Scroogerello, however, is afraid to let Goldie see him in his ragged state and runs off. However, Webby reproduces the golden top hat Scroogerello had been wearing earlier and tells Goldie that it can only be worn by her true love.

Upon returning to her castle, Goldie attempts to find her prince by having all the men in town line up and try the hat on. Each time, the hat rejects the suitors, so after no luck here, Goldie decides to just go and find "Mr. Right" herself. She eventually meets up with Scroogerello and immediately recognizes him, proposing marriage to him. Just as he accepts, though, Glomgold and the Beagles return, now back to their normal forms because they were kissed by "an ugly princess who'll kiss anyone on the first date"; they're now blowing the joint before said ugly princess comes looking for them, and they again take Goldie hostage, this time taking Scroogerello with them, as he kicks and screams.

At this point, Scrooge wakes up from the dream just in time for Duckworth and Mrs. Beakley to inform him that he has recovered from his fever. Inspired by the dream, Scrooge tells them and the kids that they're the best friends he could have, and he offers to take them out for hamburgers for lunch. 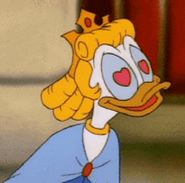