Señor Scratchy is a character in the Marvel Cinematic Universe featured in the Marvel Disney+ series, WandaVision. He is the pet rabbit of Agatha Harkness, and first appears in the second episode.

At an unknown point in time, Agatha obtains Señor Scratchy. According to her, the rabbit loves the stage, and played baby Jesus in a Christmas Pageant. When Wanda informs Agatha (under the guise of Agnes) that she intends to perform a magic act, at the Westview Talent Show, Agnes brings over Señor Scratchy for her to borrow. When Wanda and Vision perform their act, many of their tricks go wrong, and Señor Scratchy can be seen running out of Vision's hat, and hopping across the stage. Wanda grabs him, and suggests they leave him out, for their next trick.

Billy and Tommy come to Agatha's home, and Billy pets and feeds Señor Scratchy. When Billy tells Agatha that he likes it there, she asks if it's because Señor Scratchy is a good listener. Agatha later locks him up in a small cage, in her living room. When Wanda heads to the basement, in search of her sons, Agatha reveals herself, while stroking Señor Scratchy in her arms.

Agatha claims that Señor Scratchy told her, that Wanda looks shocked to meet the real them. She later throws a bug towards his direction, to eat. It is unknown what happens to Señor Scratchy after Agatha's defeat. 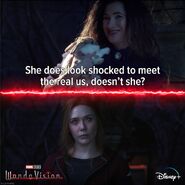