Being kept in mint condition

Children
Señorita Cactus was a character that was created for Disney/Pixar's 1999 animated film, Toy Story 2. At one point, she was going to be the third member of the Woody's Roundup gang but was eventually replaced with Jessie.

In the early version of the film just like Stinky Pete, Señorita Cactus did not like children and wished to be kept on display rather than being played with. In the original climax of the film, Buzz and the other toys would've hijacked Al's car while he was preparing to leave for the airport and tried to get Woody out of the trunk. Señorita Cactus and Stinky Pete would've tried to stop them, only for them to fall out onto the street and get picked up by two kids on bikes.

Despite being deleted from the final film, numerous "Señorita Cactus" boxes can be seen within Al's Toy Barn.

A Señorita Cactus box can be seen in the background during the part where Woody, Buzz, Rex, and Trixie arrive at Mason's house and follow a Dino-Hound toy to the Battlesaurs area.

Señorita Cactus made a cameo appearance in Toy Story 4 when Woody and Bo Peep enter the Tiki Frenzy pinball machine in search of Duke Caboom. This makes it the first time the character appears in a physical manner in a Pixar film. 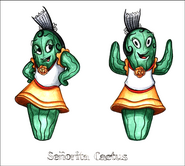 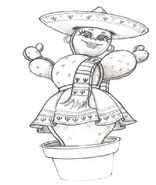 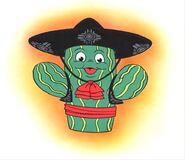 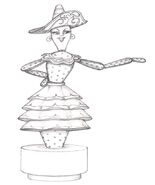 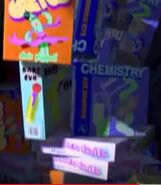 Senorita Cactus's appearance on a box in Toy Story 2