Not getting the food they want

“Oh, would you just shut up?! You're rats with wings!”
―Nigel to the seagulls

Seagulls are antagonists of the 2003 Disney/Pixar animated film, Finding Nemo.

In the film, they are portrayed as greedy, single-minded eating machines who only shout one word: "Mine!"

They are first seen cawing "Mine!" while Nigel has a crab in his wing that he is going to eat. However, much to his irritation, he ends up relieving the crab when he overhears from his fellow pelicans that Nemo's father, Marlin, is trying to search for his son, although the crab manages to escape from the seagulls.

Later, in the harbor of Sydney, the Seagulls surround Nigel, Marlin, and Dory while trying to escape from Nigel. Marlin and Dory thinks the pelican is going to eat them, but when Nigel tells them that he knows where Nemo is, Marlin flips in excitement, and the seagulls rush forward to capture the fish. Nigel scoops up them in his beak and flies away while they are being chased by the seagulls. They pursue after Nigel until their beaks crash into a sail of one of the sailboats.

Sometime later, Dory threatens to feed a crab to the seagulls when he does not want to tell them where Marlin went. The fearful crab then tells them where Marlin is and Dory frees him just moments before he gets eaten by the gulls.

Three of the seagulls appear on top of a buoy as animatronics in the Finding Nemo Submarine Voyage lagoon. They periodically flap their wings and say "Mine! Mine! Mine!"

Three of the seagulls reside on the rocks outside the entrance to The Seas with Nemo & Friends at Epcot. Like their Disneyland counterparts, they periodically flap their wings and say "Mine! Mine! Mine!"

At Finding Nemo - The Musical in Disney's Animal Kingdom, they do not actually appear in the show itself, but they do appear in the bubbles flanking the stage after the show ends to say "Bye! Bye! Bye!"

Two of the seagulls sit on top of a billboard in the loading area of Crush's Coaster at the Walt Disney Studios Park. Like their American cousins, they periodically say "Mine! Mine! Mine!"

The seagulls' first appearance in the Harbor.

"Oh, would you just shut up!" (Nigel wanting the seagulls to be quiet)

"Mine?" (Seagulls disappointed the crab escaped)

The seagulls cornering Nigel, Marlin and Dory for their lunch.

The Seagulls' cameo in Finding Dory in a different flock.

The seagulls in Disneyland Paris in France.

Seagulls at Disneyland in CA.

Close up of the seagulls at Disneyland in CA.

The seagulls at the entrance to The Seas with Nemo and Friends in Epcot in Orlando, FL. 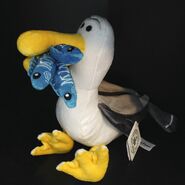 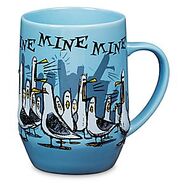 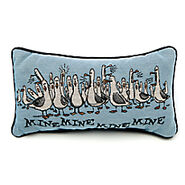 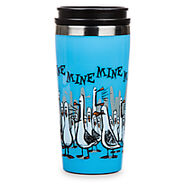 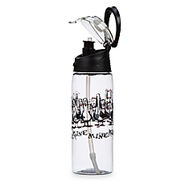 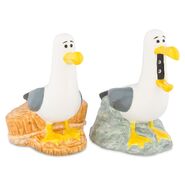