For Disney, he portrayed Russell in the Disney XD TV movie Mark & Russell's Wild Ride. Sean voices Richardson Mole in Big Hero 6: The Series[1] and Eboy in Ralph Breaks the Internet. He also portrayed Ron Stoppable in the live-action Kim Possible movie. He voices a teenage Eugene in the third season of Tangled: The Series.[2] 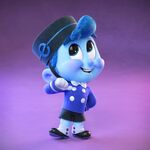 Teenage Eugene
(Tangled: The Series)
Add a photo to this gallery

Sean Giambrone speaks onstage at The Goldbergs panel during the 2013 Summer TCA Tour.

Sean Giambrione with the KP cast in July 2018.

Sean Giambrone during a Disney Channel Wand ID in January 2019.

Sean Giambrione at premiere of DCOM's Kim Possible in February 2019.

Sean Giambrone attending the IMDboat at the 2019 San Diego Comic Con.
Add a photo to this gallery

Retrieved from "https://disney.fandom.com/wiki/Sean_Giambrone?oldid=3780345"
Community content is available under CC-BY-SA unless otherwise noted.