2003-present
Sebastian Stan is a Romanian-born American-raised actor, who is best known for his television roles as Carter Baizen in The CW teen drama series Gossip Girl from 2007 to 2010, Jonathan "Jack" Benjamin in the NBC serial drama series Kings in 2009, and portrayed Jefferson/Mad Hatter in the ABC's fantasy drama Once Upon a Time in 2012. He also starred as Thomas "T.J." Hammond in the USA Network drama miniseries Political Animals in 2012. 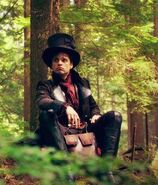 Mad Hatter
(Once Upon a Time)