March 4, 2017
"Secret Cargo" is the fifty-fifth episode of the Disney XD animated series, Star Wars Rebels. It premiered on March 4, 2017, and is the eighteenth episode in the third season.

Aboard the Ghost, Ezra, Hera, Zeb, and Chopper are hiding among the wreckage of an old Separatists vessel, carrying tanks of fuel for a Rebel ship they are expecting to meet with. On Senator Organa's request, the Ghost crew have volunteered to supply their contact with fuel, which is said to be carrying secret cargo that is essential to the Rebellion. As they wait, they watch a Holonet News report about Imperial Senator Mon Mothma of Chandrila, who has been declared a traitor for speaking out against the Emperor for his rule of tyranny. Suddenly, the Rebels are alerted by an approaching Imperial probe ship piloted by a droid. To avoid detection, they power the ship down and deactivate Chopper. Ezra mans the nose gun and awaits Hera's orders. They watch as the probe ship flies over them, carefully monitoring its surroundings. They notice the ship turning around and approaching their position. Possibly scanning for lifeforms, the probe ship shines a light on the Ghost, and the moment the droid spots Hera the Rebels open fire. They chase the probe ship through the field of shipwrecks, trying to shoot it before it can report back to the Empire. Unfortunately, the probe ship is moving too fast and there is a lot of debris in the way. However, as they head out into the open, a Rebel transport accompanied by a squadron of Y-Wings emerge from hyperspace. Eventually, Ezra finally manages to shoot the probe ship and destroy it, but there was still a chance that it managed to call for reinforcements.

Later, the Ghost docks with the transport and begins refueling the fighters. Ezra, Hera, and Zeb meet Erskin Semaj and Captain Jon Vander, leader of Gold Squadron. Due to security concerns, Ezra, Hera, and Zeb are forbidden to make physical contact with their secret cargo. They are also worried that their encounter with the probe ship might have jeopardized their mission, and were most anxious to get moving. Suddenly, light Imperial cruisers emerged from hyperspace and deployed a squadron of TIE Fighters. The Imperials open fire on the transport, and Gold Squadron forms up a defensive perimeter with Ezra piloting one of the Y-Wings. Hera and Chopper jettison the fuel tanks, but are unable to detach from the Rebel ship. So they go and detach the hatch manually. The transport sustains major damage and loses shielding, forcing the crew to evacuate to the Ghost. Among the crew, is the secret cargo who happens to be Senator Mothma. Working together, Gold Squadron disables the Imperial cruisers with ion canons, and after a struggle Mothma successfully detaches the Ghost from the transport. The Rebels regroup and jump to hyperspace.

Concerned for the senator's safety, Semaj insists they abandon the mission and get Mothma to a safe place, but the senator has no intention of hiding and insists that they proceed with the mission, which turns out to be a gathering of all the Rebel cells. Senator Mothma and a few others are in the process of building an alliance by uniting all the Rebel cells across the galaxy. It is essential that Mothma makes it to that meeting, but the Empire is out looking for her and will track any ship attempting to leave the system they are in. However, Hera knows a way to sneak Mothma out of the system, and volunteers to get her to the meeting. Meanwhile Grand Admiral Thrawn, Admiral Konstantine, and Governor Pryce are discussing the recent attack they committed against the Senator's transport. Knowing that she has escaped on board the Ghost, Thrawn deduces that in order to avoid their forces Hera will transport Senator Mothma through the Archeon Nebula. Knowing their capital ships cannot enter the nebula, Thrawn has already sent his prototype fighter and their best pilots to hunt down the Rebels and capture Senator Mothma. On Governor Pryce's request, Thrawn permits her and Admiral Konstantine to take a ship to the far side of the nebula, where they will wait until their fighters flush the Rebels out into the open. Then they can capture Senator Mothma.

On the way to Dantooine, Senator Mothma has a drink with Hera in the cockpit. The Senator speaks of her life and work in the senate, and how little it has done since the Republic became the Empire. She has come to realize that she can no longer fight in the senate, but perhaps on the front lines. They soon arrive at the Archeon Nebula, as Thrawn predicted. Captain Vander advises everyone to be careful, because there are stars forming inside the nebula and they will burn up if they get too close to one of them. Suddenly, an Imperial cruiser emerges from hyperspace, accompanied by two TIE Interceptors and Thrawn's new prototype TIE Fighter called the TIE Defender. Gold Squadron engages the fighter, but realize too late that new TIE Defender is armed with heavy cannons and shields. Piloted by Vult Skerris, the Defender takes out two of the Y-Wings. The Rebels enter the nebula with the TIEs in pursuit. Vult locks onto Ghost and fires, but Gold Five sacrifices himself by taking the hit. Only the Ghost and two fighters remain. Approaching a forming star, Hera takes a daring move in going in close to the star. The TIEs follow, and one by one the TIE Interceptors burn up. The TIE Defender still stands, and attacks the Ghost. Both ships burn up, and eventually Vult chickens out. Even though they have sustained severe damage, the Ghost heads out of the nebula while Captain Vander and Ezra hold off the Defender. However, upon exiting the nebula two Star Destroyers under the command of Governor Pryce and Admiral Konstantine emerge from hyperspace.

Governor Pryce makes contact with the Ghost and orders Senator Mothma to surrender or die. Mothma pretends to surrender, in order to give Hera some time to think of a plan. Meanwhile, Captain Vander and Ezra re-engage the Defender, and following Ezra's strategy, Vander successfully disables the Defender with his ion cannon. Governor Pryce catches the Ghost in a tractor beam, and just when Hera is about to give up Ezra and Vander show up. Following Hera's orders, the two Y-Wings fire proton torpedoes into the nebula, which ignite the gas inside creating explosions that disable the two Star Destroyers. The Ghost breaks free of the tractor beam, and the three ships escape to hyperspace. The Rebels make it to Dantooine, and upon entering orbit Senator Mothma begins her speech which is heard across galaxy. In her transmission, she expresses her disapproval of the Empire's rule of tyranny, and by uniting all those who oppose she believes they can bring an end to the Empire and restore their Republic. For a moment after asking if they all stand by her side, it is all silent. Then suddenly a fleet of Rebel ships emerge from hyperspace, replying to Mothma's transmission. the forming of the Rebel Alliance has just begun. 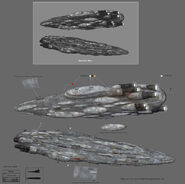 The full Rebel fleet
Add a photo to this gallery

Retrieved from "https://disney.fandom.com/wiki/Secret_Cargo?oldid=3881895"
Community content is available under CC-BY-SA unless otherwise noted.