In the kingdom of Illyria, second born royal Sam argues against the monarchy with her friend Mike by performing rock music on the streets. Her older sister, Eleanor, is to succeed their mother, Catherine to the throne following the death of their father and uncle. While spending the night out with Mike, Sam suddenly begins to experience an over stimulation of her senses while at an underground concert and gets herself and Mike arrested when she sets off the fire sprinklers. The next day, she is informed by Catherine that she is to take summer school to make up for missing her history test.

Sam attends summer school alongside eagerly friendly January, quiet and socially awkward Matteo, conceited and popular Tuma and social networking and pompous Roxana. Their teacher is Professor James Morrow who reveals that they are not there to take summer school, but instead are to be trained to join the Secret Society of Second-Born Royals, a group of superpowered individuals dedicated to protecting the world and serving the various monarchies. Morrow reveals that he has the ability to multiply himself and that Catherine is a member as well, shocking Sam. Catherine tells her that her sister Eleanor is to never know about the Society and Morrow immediately puts them to training.

Sam discovers that her heightened senses are the result of her powers awakening. Roxana learns that she can turn invisible, Tuma has mental persuasion, January can take other abilities temporarily and Matteo can control bugs. As they hone their powers, they become closer and begin opening up with Tuma admitting that his powers have resulted in him becoming conceited, Matteo feeling that he has a place where he belongs after feeling ignored, Roxana realizing that there is more beyond having numerous followers and January revealing that she has a twin brother who she feels pressured by due to him being seconds older than her. Meanwhile a prisoner named Inmate 34, escapes and unleashes his telekinetic abilities.

After a failed simulation results in Sam missing a gig with Mike, she hangs out with her new friends to cheer her up and prepare for the upcoming coronation. Mike catches Sam hanging out with January and believes that she has abandoned him. Afterwards, Inmate 34 attacks the group and Sam gives chase when he hears him call her "Snowflake", a name only her father called her. A chase in the woods results in Morrow getting severely beaten, but January rescues Sam by taking Inmate 34's powers away. Morrow is hospitalized and Sam demands to see Inmate 34 from Catherine; discovering that he is in fact Edmond, her uncle. He reveals that he killed his brother because he wanted to take down the monarchy and have the people of Illyria be citizens rather than subjects. Sam begins to reevaluate her relationship with Eleanor when it becomes clear that she wants Sam to feel free.

The rest of the Society agree to be there for Sam at Eleanor's coronation. However on the day, January is revealed to be in league with Edmond who takes Tuma's powers and releases him. She wants Edmond to kill her brother so that she can take the throne to her kingdom. Matteo manages to send a bee to warn Sam and she recruits Mike, while also apologizing and revealing her secret. Sam and Mike manage to take out January and regroup with the rest of the Society to stop Edmond, who plans on using a device that will take out everyone with royal blood. The Society confront him and battle him before trapping him in an experimental miniaturized chamber. The coronation happens with no one aware of the events.

Sam, Matteo, Roxana, and Tuma are inducted into the Society as Morrow recovers from his injuries. Catherine reveals the Society to Eleanor, who promises that her first order as queen will be to add parliament to their government. January has escaped and is now taunting the Society to come and find her and they leave by jet on their next mission. 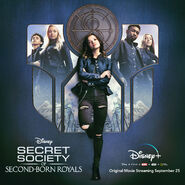