Andy's house (formerly)
See 'n Say is a series of real-life educational toys for toddlers made by Mattel that appears in the 1995 Disney/Pixar animated film, Toy Story. It is a 1989 toy owned by Andy designed to show animals and what sounds they make. Its featured animals are (clockwise starting from the top) sheep, dog, duck, frog, horse, coyote, rooster, pig, cow, bird, cat, and turkey. When the lever gets pulled, the arrow spins and, depending on which animal the arrow was pointing at before spinning, the farmer's voice is heard saying what the animal is called followed by the sound that animal makes. Other than this, it does not talk by itself.

The 1965 version of "The Farmer Says" See 'n Say appears in the 2010 triquel as a roulette wheel/table that Lotso's gang used.

In the first film, See 'n Say appears at the staff meeting before Andy's birthday party. It was one of the last toys to enter the group (as it did, it can be heard saying: "The sheep goes...baa, baa"). When Mr. Potato Head jokingly asked if they had to hold hands while holding his left arm with his right, See 'n Say laughed with the other toys while spinning its arrow (which was pointed at the horse, so it said: "Listen to the cat...meow"). When Woody told everyone that Andy's party was moved to that day, even though Andy's birthday was not until the following week, it spun its arrow rapidly in shock. Woody explained to all the toys that Andy's mother wanted to have the party before they move to their new house.

When Hamm alerts the toys that the birthday guests have arrived, See 'n Say, along with basically every other toy except Woody, run to the window to see what kind of sized presents his friends are bringing; as it runs to the window, it can be heard saying: "The rooster says...cock-a-doodle-doo". After Andy and his friends leave the room, it comes out and appears behind everyone before Woody climbs up onto the bed to greet Buzz Lightyear. Much like everyone else, See 'n Say took an immediate liking towards Buzz when he first arrived, appearing alongside him on many occasions after watching him "fly."

See 'n Say appears again at the end of the film in Andy's room engaging in the Christmas festivities with the rest of Andy's toys, appearing alongside Mr. Spell and Mr. Mike before hearing what presents Andy receives for Christmas from the Green Army Men.

Despite the fact that most of Andy's toys were seen again in Toy Story 2, See 'n Say was notably missing, which can be explained by it either being donated, handed down to Molly, or thrown out.

See 'n Say was originally supposed to reprise its role in Toy Story 2, being used as a roulette table (later reused in Toy Story 3), but didn't.

Although the See 'n Say 1989 model is not in Toy Story 3, another See 'n Say appears. It was used by Lotso's Gang as a roulette wheel for their gambling inside a vending machine. This is also a "The Farmer Says version," although it's an earlier model from the 1970s-1980s as it had the original "chatty ring".

The real-life version from Fisher Price 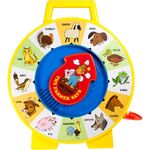 Another real-life version from Fisher Price 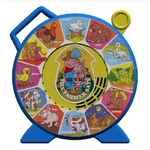