While at a carnival, the Rangers meet a fortune-telling moth named Cassandra, who predicts that Chip will be killed "before the next sun rises". On learning that one of the carnival members is a crook who is using his monkey accomplice to rob the homes of those people who have won prizes at his booth, the Rangers must find a way to solve the case while keeping Chip out of harm's way. 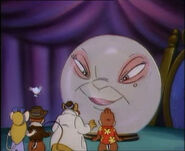 Retrieved from "https://disney.fandom.com/wiki/Seer_No_Evil?oldid=4449999"
Community content is available under CC-BY-SA unless otherwise noted.