Selenis Leyva is a Cuban-born American actress. She is well known for her role as Gloria Mendoza in Orange is the New Black and her recurring role as Detective Mariluz Rivera in Law and Order.

Her Disney roles include playing Monica Warren in Spider-Man: Homecoming and voicing Officer Cabrera in the DuckTales 2017 reboot. She also plays Gabi Cañero-Reed in Diary of a Future President. 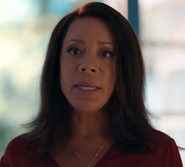 Gabi Cañero-Reed
(Diary of a Future President)
Add a photo to this gallery
Retrieved from "https://disney.fandom.com/wiki/Selenis_Leyva?oldid=4073809"
Community content is available under CC-BY-SA unless otherwise noted.