His job, his wife

Unnamed wife
Sergeant C4703BK2704-90210 is a robotic prisoner teleportation officer who appears in the pre-show of the Magic Kingdom attraction Stitch's Great Escape!. He is a re-dressed version of S.I.R. from ExtraTERRORestrial Alien Encounter. Featured in the pre-show, this animatronic is highly active with visitors, regarding the fact that he directly talks to them and provides directions and safety instructions. His comedic timidness makes the pre-show more welcoming and sets the attraction in a more light-hearted family environment, much opposed to S.I.R. in Alien Encounter.

Sgt. 90210 also makes a cameo in the mobile game Disney Magic Kingdoms as part of the game's representation of Stitch's Great Escape!. 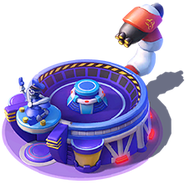