Curator
Leader of the Eternals on Earth

Dane Whitman (boyfriend)
Ikaris † (ex-husband)
Sersi is a Marvel Comics character for first appears as the protagonist in Eternals, played by Gemma Chan.

She is a member of an alien race called the Eternals. After several centuries of non-interference, she has to use her powers to protect Earth from the Deviants and decided to stop the emergence of a Celestial. She has superhuman strength, enhanced durability, and the ability to use cosmic energy to transmute matter.[1]

Sersi is one of ten superpowered Eternals sent by the Celestial Arishem to Earth to exterminate the invasive Deviants. The last Deviants are apparently killed in 1521, however, she and the rest of the Eternals wait for Arishem to tell them that they can leave.

In the present day, she lives in London with Sprite, after Sersi's partner Ikaris left her centuries earlier, she is now in a relationship with human Dane Whitman who works at the Natural History Museum. The trio are attacked by the Deviant Kro, with Ikaris arriving and chasing the creature away. Concerned that the Deviants have returned, the three Eternals travel to South Dakota to reunite with their leader, Ajak, only to find her dead. Sersi is posthumously chosen by Ajak as her successor, granting her the ability to communicate with Arishem.

Sersi contacts Arishem and learns that the mission of the Eternals was not to fight the Deviants but to prepare Earth for the "Emergence". Arishem explains that, for millions of years, he has been planting the seeds of Celestials inside planets where the energy from large populations allow the Celestials to be born. The Deviants were sent to destroy the apex predators of each planet to ensure the development of intelligent life, but when the Deviants evolved and began hunting the planets' native populations, Arishem created the Eternals to hunt them in turn. With the reversal of the Blip, Earth has reached the necessary population for the birth of the Celestial Tiamut, which will result in Earth's destruction.

Hoping to delay the Emergence, the group reunites with the other Eternals. At Druig's residence in the Amazon rainforest, they are attacked by the Deviants and kill all of them except Kro, who kills Gilgamesh before fleeing. Phastos proposes the Uni-Mind, a connection between all the Eternals that would give Druig enough power to put Tiamut to sleep with his mind-control powers. However, Ikaris reveals that Ajak told him of the Emergence centuries before. When Ajak suggested to him six days earlier that they try to stop the Emergence, he led her to the Deviants and, not wanting to betray Arishem, let them kill her. Sprite joins Ikaris due to her unrequited love for him while Kingo chooses to leave, as he does not wish to stop Tiamut's birth or fight his teammates.

Makkari locates the place of the Emergence, an active volcano in the Indian Ocean, where Ikaris and Sprite attempt to stop them. Druig knocks out Sprite and Phastos restrains Ikaris while Kro arrives and is killed by Thena. Druig is unable to put Tiamut to sleep and Sersi instead attempts to turn him into marble. Ikaris breaks free of his restraints and goes to kill Sersi, but finds himself unable to due to his love for her. Both he and Sprite join with the others in the Uni-Mind and Sersi gains enough power to turn Tiamut into marble. Guilt-ridden, Ikaris flies into the Sun. At Sprite's request, Sersi uses the remaining energy from the Uni-Mind to turn Sprite into a human, ending her permanent childlike state.

She chooses to stay on Earth with Sersi, Phastos and Kingo while the rest of the group depart to find Eternals on other planets and warn them about the truth of their mission. 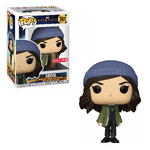