Seth Benjamin Green is an American actor, voice actor, producer, writer, and director who is best known for creating and voicing various characters on the Adult Swim stop-motion animated comedy series Robot Chicken, where he is also the writer and director, and for voicing Chris Griffin on the Fox animated sitcom Family Guy since 1999. He is also known for his roles as young Richie Tozier in the 1990 horror film It, Scott Evil in the Austin Powers films, and as Daniel "Oz" Osbourne on The WB/UPN television series Buffy the Vampire Slayer from 1997 to 2003, and the voice of Leonardo in the 2012 series of Teenage Mutant Ninja Turtles seasons 3-5.

For Disney, Green played Craig White in the 2009 Disney comedy film, Old Dogs, Chuckie Miller in Can't Buy Me Love, Selby in Enemy of the State, and the motion-capture of Milo in the 2011 Disney animated film, Mars Needs Moms (in tandem with Seth Robert Dusky, who voiced Milo). In 1988, he portrayed Jason in the Touchstone Pictures movie Big Business. He also voices Monty Monogram in Phineas and Ferb, Rick Jones/A-Bomb in the Marvel animated series Hulk and the Agents of S.M.A.S.H., Linus in the ABC TV show, Castle, Jordan Neil in The Rookie and Howard the Duck in the 2014 film, Guardians of the Galaxy its 2017 sequel, Guardians of the Galaxy Vol. 2 and the Disney+ series, What If...?. 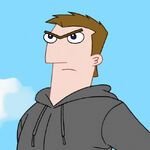 Seth Green and his wife, Clare Grant attending the premiere of Old Dogs in November 2009.

Seth Green at premiere of Mars Needs Moms in March 2011.

Seth Green speaks at the Dads panel at the FOX portion of the 2013 Summer TCA Tour.

Seth Green and Clare Grant at the premiere of Guardians of the Galaxy in July 2014.

Seth Green speaks at the Misfits and Monsters panel at the Turner portion of the 2018 Winter TCA Tour.