To serve the Dark Dragon

Wherever the Dark Dragon is

All of the Dark Dragon's enemies

Destroyed by light by Jonathan Long
Shadow Dragons are fictional creatures from the animated television series American Dragon: Jake Long. They are ghostly, non-speaking, shadowy, dragon-like beings that operate as foot soldiers for the Dark Dragon. Though neither particularly strong, intelligent, nor resilient, their basic power of numbers allow them to be a regular challenge. Due to their shadowy composition, they are susceptible to light.[1] 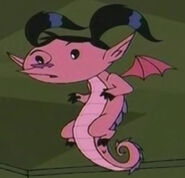 Retrieved from "https://disney.fandom.com/wiki/Shadow_Dragons?oldid=4072047"
Community content is available under CC-BY-SA unless otherwise noted.