Shagon (also known as Shagon, the Hate or Shagon the Hate)[1] (voiced by Jason Marsden)[2] is a fictional minor villain who is a member of Nerissa's evil band of followers called the Four Knights of Revenge, which later, are known in the animated series as the Knights of Destruction.

Most powerful and dangerous of the Four Knights of Revenge, Shagon is a tall, strong demon wearing a blue metal vest that (like those of his fellow Knights) has Nerissa's seal on it. His long black hair resembles a nest of snakes, giving him a Medusa-like appearance. As a human he worked as a geologist doing research near the mysterious Mount Thanos. While searching for his dog, Miska, he eventually came across Nerissa who wanted a human as "material" for her right-hand man. Shagon represents Nerissa's hatred for Kandrakar and feeds on expressions of hate. His life essence was nearly absorbed by Nerissa in the final battle but he wounded her and reverted back to his original form. Despite the hatred he expresses he did not forget his feelings as a human about the transformed dog Miska.

Shagon, the Hate, was one of Nerissa's Knights of Destruction. Matt Olsen was transformed into Shagon by Nerissa's power over Quintessense. In the episode "L is for Loser". Nerissa gained control over his mind, by using the hatred he felt for her as a weapon. Shagon's Power was fueled by the hatred his enemies felt, which he used to mock Will by implying that he had hurt Matt. Cornelia repeatedly urges Will to not allow Shagon to get to her. In "M is for Mercy" Shagon attacks the Guardian's families in order to increase their hatred, which he does successfully. He takes particular joy in taunting Will, as he claims her hatred is pure and that he's enjoying himself too mu

ch. He also claims that he is so bad he hates himself. Will tries to appeal to his better judgment, which causes him to flee. This is possibly due to Matt trying to regain control of his body and make Will aware of the situation. Shagon assumes Matt's identity (AKA poses as Matt) in order to spy on the guardians and cause Will to hate him even more. NOTE: It is implied that the reason why Shagon is so merciful towards Will is because he still harbors Matt's strong romantic feelings for her.

In the episode "S is for Self", Shagon is in trouble of revealing that he is not really Matt when he struggles to perform to Matt's usual standard. Inside Shagon's head,

Matt argues with Shagon that if he does not allow him to help, he will blow his cover. Shagon allows Matt enough control of their brain and body so he can rehearse with his band and relieve himself of suspicion. Matt almost manages to regain control several times in order to warn Will, Shagon realises Will threatens his control over Matt so he decides to get rid of her. He convinces Will he needs her help and leads her into an ambush. Taranee and Cornelia show up in time to help her. The Knights gain the upper hand and nearly defeat the Guardians. Matt, seeing Will in trouble, gets through by singing the song he wrote for Will (The Will To Love). Will, realises that Matt is inside Shagon, calls out to him, thus gives him the strength to fully break free of Shagon and destroying his soul. Matt then uses Shagon's power to turn the tables on the Knights of Destruction. Meanwhile Nerissa (who was watching the battle through a Fold) drains the Knights of their power to fuel the original Guardians CHYKN reverting Matt and Mr Huggles back to their original forms. In "U is for Undivided", Matt regains his Shagon form from Lillian Hale, the Heart of Earth. He becomes one of the three Regents of Earth, who help protect the planet and assist the Guardians in their fights against evil. 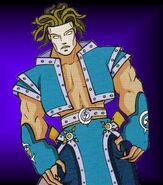 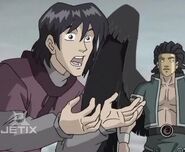