"Shake It Up" by Selena Gomez

Shake It Up is an American television sitcom on Disney Channel in the United States of America. The series premiered on November 7, 2010. Created by Chris Thompson and starring Bella Thorne and Zendaya, the show follows the adventures of CeCe Jones (Bella Thorne) and Rocky Blue (Zendaya) as they star as background dancers on a local show, Shake It Up Chicago. It also chronicles their misadventures on and off-set, and their troubles and rising social status at school. Davis Cleveland, Roshon Fegan, Adam Irigoyen, Kenton Duty, and Caroline Sunshine also are other main cast members in the series.

The show's original concept was for Disney to create a female buddy comedy, only with a dance aspect. The dance concept is Disney's third original series, after The Famous Jett Jackson and Sonny with a Chance, to use a show-within-a-show format. The series is also the first Disney Channel Original Series since So Random! and Sonny with a Chance to have more than six main contract cast members at one time.

On March 16, 2011, it was announced that the series had been renewed for a second season, and on September 29, 2011, Disney Channel announced it had increased Shake It Up's second season order to 26 episodes. An album with songs from the series, Shake It Up: Break It Down, was released on July 12, 2011.

When Disney Channel announced its 2014 lineup, it was announced the show was cancelled and would end after 78 episodes. The finale episode, Remember Me (otherwise known as Remember It Up), aired on November 10, 2013. 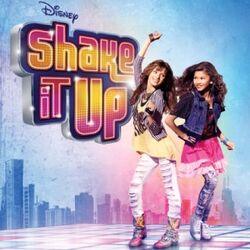 Shake It Up revolves around the adventures of best friends Rocky Blue (Zendaya) and CeCe Jones (Bella Thorne), who with the help of their longtime friend, Deuce Martinez (Adam Irigoyen), fulfill their favorite dreams of becoming professional dancers when they land roles as dancers on a local show, "Shake It Up, Chicago!" CeCe and Rocky deal with their circumstances, by adapting and maintaining their social status at school while watching CeCe's little brother, Flynn (Davis Cleveland), and the antics of their TV show which includes their matching the skills of their competition, notably brother and sister, Gunther and Tinka (Kenton Duty and Caroline Sunshine). The show also has storylines which include Rocky's brother Ty (Roshon Fegan), who also has dance skills. Selena Gomez performs the theme song, "Shake It Up" and featured it on "Shake It Up: Break It Down".

The show was ordered up as Disney's attempt in its first female buddy show, but with a dance-driven aspect. Initially, carrying the working title Dance, Dance Chicago, the original description was described as the journey of two kids on a contemporary American Bandstand-type show. Veteran television producers Chris Thompson, a former writer for Laverne & Shirley and creator of Bosom Buddies and Rob Lotterstein, who had worked on several series including Boy Meets World were assigned to work on the story. Bella Thorne and Zendaya were cast as the two female leads, as well as Camp Rock cast member Roshon Fegan in a co-lead role. On May 21, 2010, with the title change revealed as Shake It Up, the production for the show was announced to begin in July and anticipated for a fall 2010 premiere. President of Disney Entertainment, Gary Marsh said the Bella Thorne/Zendaya duo were the most engaging best friends they had seen on the network. On what makes the show different, Marsh said "while buddy comedies have been around since the start of television," that "this is the first time anyone has incorporated dancing into the underlying premise of a sitcom."

The concept of the show has been noted to be very similar to that of fellow Disney Channel series Hannah Montana, and according to The Sun-Sentinel, Shake It Up is the same approach with dance. Additionally, the show is Disney's third series to have a show-within-a-show following "Silverstone" in The Famous Jett Jackson and "So Random/Mackenzie Falls" in Sonny with a Chance. Chuck Barney of the Contra Costa Times said that the show's plots "play out in typical Disney Channel style with uncomplicated storylines, broad humor, and moral uplift." In an interview, Bella Thorne said of the show, "It is about them going through the stuff that teens go through every day. The writing is very realistic. I have gone through most of these problems." Rosero McCoy, a choreographer for Camp Rock and Camp Rock 2: The Final Jam was tapped to be a choreographer for the show, along with Claude Racine. Shake It Up is shot at Los Angeles Center Studios.

The series succeeds Hannah Montana, Jonas L.A., I'm in the Band and Phineas and Ferb as Disney's latest foray into music-oriented series. According to Rick Bently of the Fresno Bee, the show's timing was to capitalize off the success of the current dance series' Dancing With the Stars and So You Think You Can Dance. Original music for the series has been produced and recorded by the show's cast and various artists, with the theme song "Shake It Up" performed by Hollywood Records artist Selena Gomez and the Scene. The theme was written by Aris Archontis, Jeanne Lurie and Chen Neeman, who also penned the opening title themes to fellow Disney series Sonny with a Chance and Good Luck Charlie.

In initial casting, Disney searched for two female co-leads. Although boasting elaborate credits of prior television experience, including guest starring on Wizards of Waverly Place, Bella Thorne was cast after never dancing professionally before, and takes dance classes three times a week to improve. Zendaya had theater background prior to her casting and grew up in theater when her mother worked at the California Shakespeare Theater in Oakland, California. Having the same agent that discovered Miley Cyrus, she won the role after several auditions and over 200 other hopefuls. On the casting of the two, Judy Taylor, Senior Vice President of Casting for Disney Channel commented that Coleman was "completely engaging" with a "great presence" and that Thorne had "high energy" and viewers would want to "want to get to know her better the instant you meet her." One goal was for the two leads to have chemistry working together, and Thorne said of her relationship with Zendaya, "When we first met, there was this energy," she says. "It was like we were meant to be together."

Adam Irigoyen was cast as Deuce Martinez. Irigoyen credited his family for his success, moving him out to Los Angeles two years prior for him to start his career. Irigoyen has previously worked on Wizards of Waverly Place. Davis Cleveland, whose work included guest appearances on Good Luck Charlie, "Zeke and Luther" and Hannah Montana Forever, was cast as CeCe's younger brother, Flynn.

Disney Channel veteran Roshon Fegan, who co-starred in both films of the Camp Rock film series, was cast as Rocky's older brother Ty. In the recurring role of Gary Wilde, R. Brandon Johnson was cast the day before the pilot and began taping the next day. Kenton Duty was cast as Gunther, after four audition attempts. Stefanie Scott was originally cast as Gunther's twin sister Tinka, but Disney Channel decided to cast her as Lexi on A.N.T. Farm instead. Casting for Tinka ran again and Caroline Sunshine landed the role after canceling plans for a family vacation so she could audition. The brother/sister duo of Gunther and Tinka is said to be inspired by Ryan and Sharpay Evans of Disney's High School Musical series.

On June 5, 2011, a Good Luck Charlie episode "Charlie Shakes It Up" premiered. In this episode Good Luck Charlie characters Teddy, Charlie, and Amy all go to Chicago to visit their great-aunt Nell but, when they arrive, they take the wrong car and are mistaken for the Duncan Sisters (two dancers) on Shake It Up Chicago!. Gunther, Tinka, and Ty did not appear in the crossover, only Cece, Rocky, Deuce, Flynn, and Gary appeared.

On December 23, 2011, a repeat of the episode "Party It Up", where a female character complimented CeCe and Rocky with the line "'I could just eat you up...well, if I ate" aired on the channel that evening. Former Disney Channel personality Demi Lovato, who left Sonny with a Chance in the fall of 2010 for counseling because of personal issues, commented on the episode, criticizing the network through Twitter for including a joke about eating disorders when she had struggled through the issue herself, and as one of the reasons for leaving the company's fold. Disney Channel's public relations account responded to Lovato by stating that episode and an episode of So Random! which had an eating disorder joke would be pulled from the network's airing cycle and reviewed further. The episode has since been made unavailable via Netflix's instant streaming service, along with it being removed from the iTunes Store.

It was announced during the 2011 Licensing International Expo that a Shake It Up movie is in the works. It was confirmed that the movie title would be Shake It Up: Made in Japan and it was also announced that the movie would be 90 minutes long. It was broadcast on August 17, 2012, as an extended length season two final episode.

The series has earned mixed-to-negative reviews. Tom Gliatto of People Weekly gave the series two out of four stars, writing, "Shake It Up doesn't shake up the kid-com formula one bit, but it has something more than the usual shiny-sparkly cuteness".