When a fight over their late mother's Royal Doulton Bowl accidentally leaves a crack in the family heirloom with Shamus and Clyde telling that the Banks children had broke it causing their carriage wheel to break, Mary Poppins takes the Banks children and Jack inside the bowl to help fix the carriage wheel. When the children asked for a ride because they felt the trip was too short, Shamus and Clyde give the group a trip through the bowl to the music hall.

Later, when Georgie gets kidnapped by the Wolf and his accomplices, both Shamus and Clyde help drive them get on to the wagon carrying their brother. 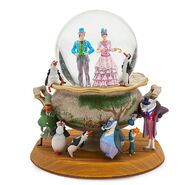 Add a photo to this gallery
Retrieved from "https://disney.fandom.com/wiki/Shamus?oldid=3506419"
Community content is available under CC-BY-SA unless otherwise noted.