1986-present
Shane Black is an American screenwriter, director, producer, and actor. He has written several action films, such as Lethal Weapon, The Last Boy Scout, Last Action Hero, and The Long Kiss Goodnight.

For Disney, he co-wrote and directed the 2013 Marvel Studios film, Iron Man 3. As an actor, he voiced a caller in Marvel One-Shot: Agent Carter and made a cameo as himself in the 1998 Hollywood Pictures film, An Alan Smithee Film: Burn Hollywood Burn. 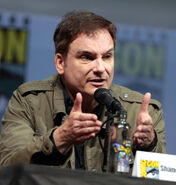 Shane Black speaks at the 2018 San Diego Comic Con.
Add a photo to this gallery
Retrieved from "https://disney.fandom.com/wiki/Shane_Black?oldid=4003765"
Community content is available under CC-BY-SA unless otherwise noted.