Bridgit Mendler (2011-2015)
Shane Steven Harper is an American actor, singer-songwriter, and dancer. He is known for playing Josh Wheaton in the independent Christian film, God's Not Dead.

For Disney, he played Spencer Walsh on Good Luck Charlie. He also appears as a dancer in High School Musical 2, Fidel on Wizards of Waverly Place, and as himself in So Random!. 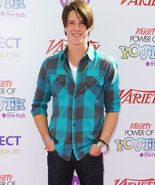 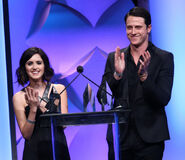 Shane Harper and Laura Marano speak onstage at the 8th annual Thirst Gala in April 2017.
Add a photo to this gallery
Retrieved from "https://disney.fandom.com/wiki/Shane_Harper?oldid=3939223"
Community content is available under CC-BY-SA unless otherwise noted.