Retires from the Navy and becomes Zoe, Seth, and Lulu's school's wrestling coach
Shane Wolfe is the protagonist of the 2005 Disney action comedy film The Pacifier.

Being a Navy Lieutenant, Shane is a strict disciplinarian who takes his job very seriously.

Shane's mother walked out on him when he was little. His father - a Spec Ops soldier - enrolled him into military school when he was eight, which he has always reckoned was due to how his father liked the life of a soldier more than that of a parent. One day, he got a letter that his father had been killed in action. Shane never talked to anyone about how he felt following this as he thought it as letting his father down.

Several years later, Shane became a lieutenant in the Navy SEALs. He led and choreographed several rescue missions and snatch and grabs from all around the world. One of his latest missions was to rescue Professor Howard Plummer, who'd been kidnapped by Serbian rebels. After he and his men took out the rebels, Shane was able to get the professor to their way out. Unfortunately, Shane later found the crew of the helicopter he and the professor were using to escape dead and was too late to save the professor before he himself got shot and injured. This ended up with him in hospital for two months.

After being released, Shane is told by his boss, Captain Bill Fawcett that Plummer was working on GHOST, which was maybe why the Serbian rebels kidnapped him as they may have thought he had the GHOST on him. Fawcett said that his boss, Admiral Blair, was contacted by Howard's widow, Julie, as she thought GHOST was in her house. Fawcett had Shane take care of the house and the Plummer kids Zoe, Seth, Lulu, Peter, and Tyler while he and Julie were dealing with a safety deposit box. Unfortunately, Shane didn't get on so well with the kids because of how he thought they weren't disciplined and they didn't like his strict militaristic attitude.

Shane was soon able to get on the kids good sides after he protected them from a couple of intruders after the GHOST, and agreed to listen to them if they listened to him. He then proceeded to help them out – helping Zoe with her driving test, Lulu and her fireflies troop learn self-defence against a group of boys that were bullying them and Seth with a production of The Sound of Music he was in. He was able to find the GHOST, and greeted Fawcett and Julie after they returned from getting the safety deposit box. While being congratulated by Bill, he and Shane ended up at gunpoint by the Plummers' next-door neighbors, the Chuns. This led Shane to realise that Fawcett was a double agent after the GHOST.

Shane was later able to get the GHOST after being forced to at gunpoint by Fawcett. He and Julie were then able to knock out Fawcett and Mrs. Chun, and also helping to take down Mr. Chun. After the GHOST was successfully retrieved, Shane ended up changing careers and later became Zoe, Seth and Lulu's school's wrestling coach. 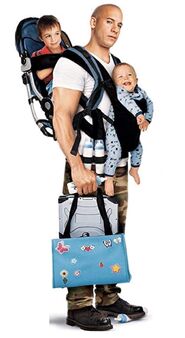 Retrieved from "https://disney.fandom.com/wiki/Shane_Wolfe?oldid=4217765"
Community content is available under CC-BY-SA unless otherwise noted.