His father's criminal ways, his mother's death, being a killer, losing his family, his friends in danger, violence

Xu Shang-Chi, simply known as Shang-Chi (Simplified Chinese: 尚气; Traditional Chinese: 尚氣), is a superhero from Marvel Comics. He debuts in the Marvel Cinematic Universe as the eponymous protagonist of the film, Shang-Chi and the Legend of the Ten Rings. He is portrayed by Simu Liu.

Shang-Chi was created by Steve Englehart and Jim Starlin.

Shang-Chi was born at some point between June 1999 and September 1999. He was raised by his father Xu Wenwu and mother Ying Li in the Ten Rings Headquarters in the mountains of China. He was many trained in the arts of kung fu for years since he was a child. 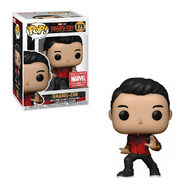