Strength
Sharla is a character from the Timon & Pumbaa TV series who appears in the episode "Home is Where the Hog Is". She is the leader of Pumbaa's former sounder.

Ever since Pumbaa's exile, Sharla became Head Hog of the warthog sounder. She, as well with the three male warthogs, has banished Pumbaa from their group due to his foul smell and they haven't seen each other in years until the guinea fowl invasion.

Sharla is a kind-hearted warthog. Being the leader of the warthog sounder, she can be demanding to the three male warthogs. Despite banishing Pumbaa from the sounder, she still has romantic feelings for him and tells him that she has never forgotten him when they reunite. She also sticks up to Pumbaa when the other warthogs force him to leave as they are disgusted by his smell.

Sharla is, like most warthogs, broad and portly with a large head, a round middle, and skinny legs. Her main shade is pink, with her mane and tail tip being darker pink and her nose being lighter pink. Additionally, she has a blue bow tied to her tail and a yellow crown to represent her leadership to the warthog sounder.

"Home is Where the Hog Is"

As Timon and Pumbaa traipse the jungle and eat bugs off a battered jeep, they hear a distress call. The two go to another part of Africa and discover that the call is coming from a hut. Pumbaa explains that a group of warthogs is making the call and they realize that the hut is surrounded by guinea fowl, who are the warthogs' natural enemies and worst nightmares. Pumbaa states that the Guinea fowl are there for the warthogs' supply of bugs and that the hogs are unable to leave the hut as the fowl can strip off their flesh in only ten seconds. This makes Timon want to leave, but Pumbaa suggests that they should save the warthogs since he answered the call.

While Timon and Pumbaa are using a rope to get inside the hut, the warthogs believe that they are doomed, not only because of the guinea fowl but because the rainy season is almost here and it will fill up the hut with water, which would cause the warthogs to drown. When they try to think of a way to leave the hut and survive from the birds, Timon and Pumbaa fall into the hut. Sharla is happy to see Pumbaa again, telling him that she has never forgotten him. Pumbaa introduces Timon to his old sounder, telling him that he was banished from there, which the three male warthogs reveal that it was because of his gas problem.

When the male warthogs force Pumbaa to leave, Sharla sticks up to Pumbaa by telling the other warthogs to give him a chance, as he answered the call and came to their rescue. When Sharla asks Pumbaa what his plans are to get rid of the fowl, he suggests that they have Timon come up with an idea since he's the "brains of the outfit." Timon states that the only way to get rid of the guinea fowl is to think like one.

When all of Timon's ideas unfortunately end in failure, Pumbaa comes up with a plan of his own. He and Timon return to their jungle to find the battered jeep from earlier. Pumbaa states that the jeep is perfect as it is big enough to carry the warthogs' supply of bugs and fast enough to outrun the guinea fowl, but Timon states that it is also broken enough for it to take weeks to be fixed unless one of them were a certified fixer upper, which gives Pumbaa an idea.

After Pumbaa receives a certificate for being a fixer upper, Timon and Pumbaa fix the jeep and successfully get it to run. They return to the warthogs' hut to let them in with the jeep without letting the guinea fowl enter.

Later that night, Pumbaa and Sharla are talking under the moonlight. Sharla wants Pumbaa to become a member of the sounder again, telling him that he belongs with them (especially her), but Pumbaa tells her that he prefers to stay with Timon as a wanderer and he can't have her cover her snout from his smell forever, which she realizes that he's right.

The next morning, Timon and the male warthogs put the bag of bugs on the jeep. After Sharla gives Pumbaa a kiss on the cheek as her final goodbye to him, Pumbaa and Timon leave the hut and try to outrun the guinea fowl with the jeep. After Timon and Pumbaa fall off a cliff with the jeep, it is revealed that the bag is filled with firecrackers instead of bugs. When the firecrackers explode and turn the fowl into hot meals, Pumbaa explains that he used the bag of firecrackers to fool the guinea fowl into thinking that it has bugs in it while Sharla and the other members of the sounder leave with the real bag of bugs. The sounder then makes a call as a sign that the problem is resolved. 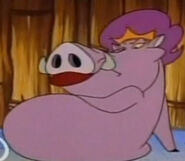 Sharla with the three male warthogs