Not having her way, anyone better than her, the color orange

She is the co-president of the East High drama department alongside her fraternal twin, Ryan Evans, with whom she has starred in seventeen school productions. Sharpay appears to have the most power in the drama department, leaving Ryan Evans as her right-hand man. However, the sibling loyalty is not always mutual. Classmate Taylor McKessie suspects that if Sharpay "could figure out how to play both Romeo and Juliet, her own brother would be aced out of a job." Sharpay's family is very affluent; their wealth stems from the country club, Lava Springs, her parents own.

Sharpay Evans is portrayed by Ashley Tisdale in the first three films of the High School Musical series. Ashley Tisdale, who was previously known for her starring role on the Disney Channel series "The Suite Life of Zack and Cody", insists that she was not offered the role of Sharpay and had to audition, also claiming that she almost didn't get the role because the Disney executives did not think she could play the "mean girl" role based on her performance in "The Suite Life". Tisdale said that she went into the auditions at the last minute, but felt very comfortable in front of the Disney executives, as she already knew them. To ensure that viewers loved to hate her character, Tisdale looked to Rachel McAdams' performance in Mean Girls.

Sharpay is shown as being somewhat popular. Students on campus seem to fear her, as they scurry to make room for her in the hallways or cafeteria. Fear also appears to be the reason why other students, such as Kelsi Nielsen, remain a part of Sharpay's posse. Sharpay is sometimes the victim of playful jokes and light teasing from the East High basketball team, despite the fact that one of their star players, Zeke Baylor, has a crush on Sharpay. Sharpay's talents are challenged for the first time when Gabriella Montez and Troy Bolton are called back for the lead roles in the musical. To ensure that she and Ryan remain in the spotlight, Sharpay convinces Ms. Darbus, the musical's director, to switch the date of the callbacks to the same day as Troy's district championship basketball game and Gabriella's national decathlon. However, Troy and Gabriella still manage to make the callbacks and are cast in the lead roles of Arnold and Minnie.

Sharpay seems to have gained more popularity, with adoring fans wanting her signature in their yearbooks at the end of the school year. Sharpay plans to steal Troy away from Gabriella during summer vacation. She has the manager of Lava Springs, Mr. Fulton, hire Troy to work at the country club, ordering him to do so, whatever it takes. The cost of Troy's employment is the employment of Gabriella and their friends. Realizing that she must now try to win Troy's affections with extreme measures, Sharpay brings Troy into the high class world of her family, which eventually leads to his promotion and college opportunities. Sharpay also convinces Troy to sing with her in the Midsummer Night Talent Show, abandoning plans to enter the show with Ryan. Ryan begins to step out of Sharpay's shadow and Troy eventually begins to free himself from Sharpay's grip. Sharpay is unable to perform at the talent show, but does join Troy and Gabriella's duet in the background, along with their other friends. Despite having little involvement in the show, the fixed competition's prize, the Star Dazzle Award, was going to be given to her, but she selflessly awards the prize to her brother, who arranged Troy and Gabriella's duet.

Sharpay's popularity seems to be limited among admiring boys. In her senior year, Sharpay meets Tiara Gold, a British transfer student eager to learn the ropes at East High School by becoming Sharpay's student. Tiara's dedication is impressive, but it turns out to be a facade. On opening night of the spring musical, Tiara attempts to upstage Sharpay, but fails. Sharpay does not received a scholarship to the Juilliard School like she had hoped and will study the dramatic arts at the University of Albuquerque, but has agreed to return to East High to assist Ms. Darbus with the drama department and to continue her reign over Tiara Gold.

Sharpay is given the chance to go to the Big Apple, to perform an audition for A Girl's Best Friend, starring Amber Lee Adams. She finds out that the producers wanted to audition her dog, Boi and not her. In New York City, she befriends Peyton Levertt. 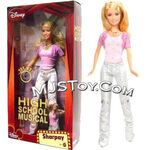