Dana Renee Wasdin (2012-present)
Shawn Robert Ashmore is a Canadian actor. He is probably best known for his role as his role as Iceman in the first three X-Men films also his appearance in X-Men: Days of Future Past. He also played Jake Berenson in the television series Animorphs and Agent Mike Weston in the television drama series The Following.

His Disney roles so far are Cadet Major Brad Rigby in Cadet Kelly, Gord in Flash Forward, Chet in The Famous Jett Jackson, Tyler Connell in In a Heartbeat, Sam Sullivan in the ABC TV show, Conviction and Westley Evers in The Rookie. 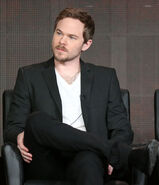 Shawn Ashmore speaks at The Following panel at the 2013 Winter TCA Tour. 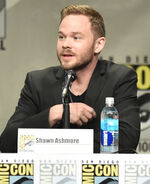 Shawn Ashmore attending the 2017 Tribeca Film Fest.
Add a photo to this gallery
Retrieved from "https://disney.fandom.com/wiki/Shawn_Ashmore?oldid=3978639"
Community content is available under CC-BY-SA unless otherwise noted.