She-Hulk: Attorney at Law is an upcoming Disney+ original series, set within the Marvel Cinematic Universe, centering on She-Hulk. Jessica Gao will be the showrunner for the series.

The series follows Bruce Banner's cousin Jennifer Walters who has gained super strength after receiving a blood transfusion from Bruce.

On May 5, 2020, writer Dana Schwartz confirmed via Twitter, that the scripts for She-Hulk had been completed.[9] 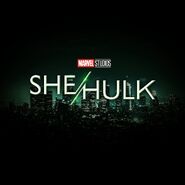