Disney Wiki
Register
Don't have an account?
Sign In
Advertisement
in: Characters, Phineas and Ferb characters, Disney characters,
and 10 more

Drummer for Love Handel (formally)
Librarian
Sherman, better known by his stage name "Swampy," (voiced by Steve Zahn) is a recurring character on the animated series Phineas and Ferb. He is a librarian and former drummer of the 1980s hair band Love Händel. Sherman was a part of the band for as long as is known, though infighting and other complications lead to the band sizzling out and going their separate ways. The band would reunite a decade later to celebrate a wedding anniversary between Linda Flynn-Fletcher and Lawrence Fletcher.

Sherman's first known event in life was being a member of the band Love Händel during the 1990s alongside Danny and Bobbi Fabulous. Sherman donned the pseudonym "Swampy" and played as the band's drummer. Love Händel met generally critical acclaim - their song, "You Snuck Your Way Right Into My Heart", was a huge success, topping the charts for eleven consecutive minutes.

After the hit song, the band began to sizzle out of the spotlight. Sherman and Love Händel began to perform at smaller and smaller venues and began to in fight. Sherman especially had heated hatred with Fabulous, who generally was his opposite and hated his slovenly behavior. The fan base continued to dwindle and the band decided to break up. They performed a farewell concert, in which they spotlighted Linda Flynn and Lawrence Fletcher, who eventually would wed on June 15. Afterward, the band broke up and went their separate ways. Sherman began to work at the Tri-State Area Library, seeing the change as conformable, enjoying the 1980s era carpeting, the access to literature, and the kind elderly ladies he worked aside.

Sherman has shown signs of professionalism and slovenliness. His career as a librarian and his stated enjoyment of access to "all the books [he] can read" shows that he takes interest in literature; conversely, he ate a piece of cake that had been thrown out, giving the excuse "You can't let good cake go to waste." Sherman is also rather laid-back, which leads him to have constant bickering with his band member, Bobbi Fabulous.

Sherman appears to take great enthusiasm in his drumming capabilities. When he was younger, while performing, he was always seen smiling and being very excited. When he seemingly lost his sense of rhythm, he tried to cope by taking on a new career as a librarian, convincing himself it had enough perks and he didn't need to be famous. When he reestablished his sense of skill, he was once again vibrant and performed happily in both the reunion concert and the performance for Doofenshmirtz's flashback.

Either naturally or as a result of "the accident," Sherman seems physically unable to stop producing a rhythm out of whatever is available, even though he himself does not seem to notice this - he spends the entirety of "Aint Got Rhythm" insisting that he can no longer keep time, all the while involuntarily creating the drumbeat for the song using various objects around the library.

After working at the library for over a decade, Phineas Flynn and Ferb Fletcher, the sons of the couple Love Händel spotlighted at the farewell concert, approached him wondering if he was the "Swampy" of the band. Sherman informed them of his detachment with the band anymore and they asked if would join the band in a reunion concert for their parent's wedding anniversary.

Sherman told them of his rhythm issues, though Phineas was unconvinced due to Sherman's rhythmic beating of books and attempted to convince him otherwise through song. Sherman, throughout it, continued to deny his abilities with rhythm, though eventually came to realization and accepted to join back for the reunion concert.

When the band reunited at the boys' garage, Sherman was the only one to refuse to wear the old outfit again. While they were waiting for Linda Flynn to return to the house and begin, Sherman began eating a slice of cake that had been thrown out. Danny pointed this out in shock, Sherman arguing you couldn't "let good cake go to waste." Fabulous made a comment after this that insulted Sherman, and they began to argue. Danny was going to leave and break up the band again, but the roar of the crowd made want to continue. The band started the performance as Linda arrived.

Sherman and the rest of Love Händel were eventually either back together or simply offered to perform for Heinz Doofenshmirtz's flashback. Doofenshmirtz explained that he got them all to perform because he "knew people." 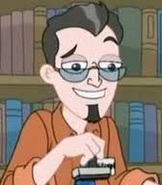